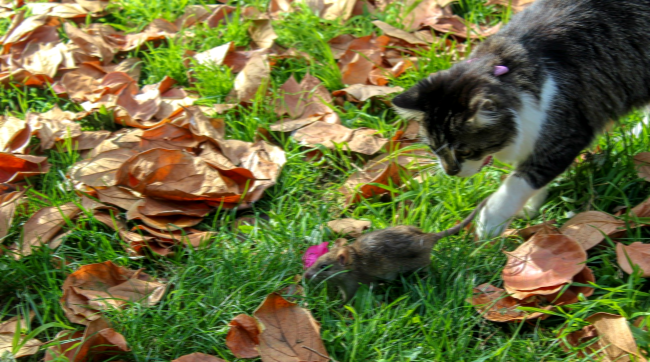 With the ongoing pandemic and people still not eating out at restaurants as much as usual, it’s hard out there for a rat these days.

Gone are the days of a rat being able to just chill by a restaurant dumpster to get its daily sustenance.

Now a new report reveals that in Chicago they regularly release feral cats on to the city’s streets in an effort to combat the rat infestation that has plagued the area for a decade.

Related: Millions Of Mice Are Terrorizing Australia, Looks Like Something Out Of A Horror Film

According to WGN News, Chicago was named the rattiest city in America by Orkin for the sixth consecutive year. Which means, the Tree House Humane Society is releasing more feral cats into the city.

“We’ve had a lot of our clients tell us that before they had cats, they would step outside their house and rats would actually run across their feet,” said Sarah Liss of Tree House, who runs what they call the “Cats at Work” program.

Okay, but are packs of wild feral cats on city streets really a better alternative to rats? Have you ever been around a feral cat? They are literally the devil’s spawn. I’d rather have a rat in my house than a feral cat any day of the week.

Usually, the shelter safely traps such outdoor cats and spays and neuters them, before returning them to one of their more than 1,000 “feral cat colonies.”

But sometimes the cats cannot be re-integrated into a feral cat colony, like when an abandoned building housing them is demolished. So, they’re put to work.

Related: New Yorker Swallowed By Sinkhole Full Of Massive Rats And He Was Afraid To Yell Or They’d Crawl In His Mouth

Did you read that? The shelter actually assists and helps rebuild these “feral cat colonies.” Am I taking crazy pills or does that not sound like a horrible idea?

Liss says these cats don’t even eat that many of the rats, they just deter them from coming around “with their pheromones,” which probably smells like burning sulfur.

She also says that releasing these feral cats is an environmentally safe alternative to poison. Whatever.

“In most cases, our Cats at Work become beloved members of the family or team and some even have their own Instagram pages,” reads the shelter’s website.