Drunk Dude At Circle K Spouts The N-Word, Gets OBLITERATED With A Twisted Tea Can – See The Memes 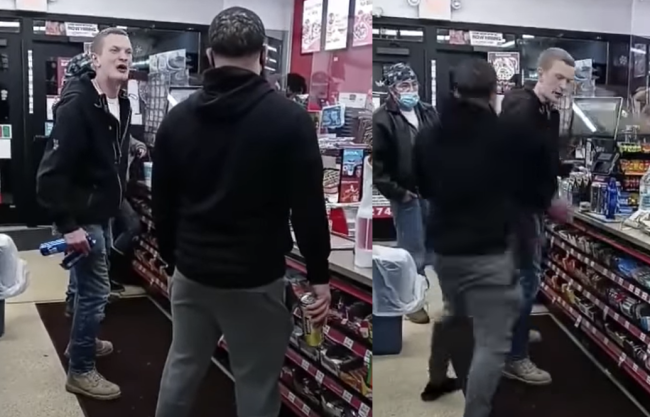 With only days left in 2020, there is a video making a late push for the most important viral video of the year; and it is a doozy. This viral video plays out like an award-winning movie at the Cannes Film Festival: there is a hero, a villain, intriguing side characters, plus a rollercoaster of emotions from anger to sadness to being overwhelmed with joy.

Strange things are afoot at the Circle K in Elyria, Ohio. That’s where a seemingly overly intoxicated man is incessantly spouting racial slurs while paying for beverages at the convenience store. A black man is in line and patiently endures the uncalled for abuse. The black man politely asks the seemingly rat-arsed fopdoodle to stop dropping the N-word. Never-the-less the drunk dude, who looks like Michael Rapaport’s slightly less annoying little brother, continues mouthing off.

The black man picks up a can of Twisted Tea and wields it like a yet-to-be-activated lightsaber. The sloshed blowhard reacts by shouting, “What? You gonna smack me with that?” Then the inebriated hoodlum slams his beverages onto the counter and yells, “Smack me! Smack me n****!”

The black man drops the Twisted Tea on the ground and the windbag attempts to kick it but misses. That’s when the black man turns the can of Twisted Tea into a glorious Excalibur sword and absolutely pummels the cockalorum. A mighty “THWAAAAP” echoes through the Circle K as the loudmouth gets destroyed and he is dropped to the floor.

The white kid bounces back up from the devastating blow, perhaps because he appears to be all zooted up. But it was a big mistake for him to get back up. The gentleman obliterates him again, takes him to the ground, and lands several solid punches to the head. The obnoxious sh*t-stirrer then almost gets choked out.

Here is the Twisted Tea hero and where it all went down.

The video, which was uploaded on Christmas Eve, has already gone viral on YouTube, Twitter, Reddit, and other social media platforms. The internet has already done it’s thing, and created funny memes and impressive video remixes for the Twisted Tea can smack heard round the world.

When the cop ask me if I have any weapons in my car #TwistedTea pic.twitter.com/BjEzh04yuu

pls enjoy my contribution to the twisted tea memes pic.twitter.com/O8wYkg3lBg

When your friend brings twisted tea to the party #TwistedTea pic.twitter.com/YKWAE4tL7b

I keep that thang on me😎👌🏾 #JohnWick #TwistedTea #Memes pic.twitter.com/W1cGmWGDqh

The best commercial for anything I have seen #TwistedTea pic.twitter.com/tU3fw6oZDW

Me when Karen starts acting up at the gas station👀 #TwistedTea pic.twitter.com/6Y1tYouAtt

When did twisted tea become a meme of a lethal weapon? Did i miss something over the weekend? pic.twitter.com/bPcnvUhsRP