We Now Live In A World Where College Decision Reveals Exist 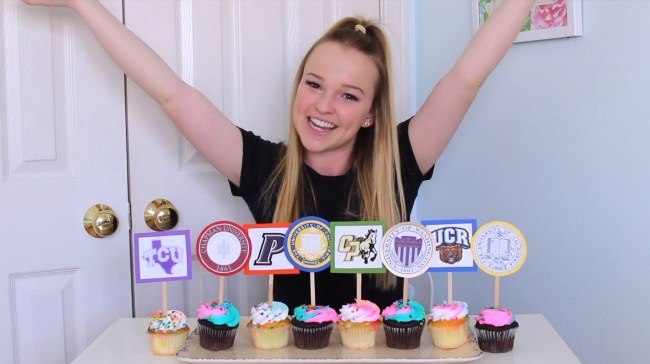 First there were elaborate promposals, which lead to a weird phenomenon of adult celebrities going to the prom with high schoolers. Then there were gender reveals, some of which ended in huge wildfires that cost $8 million. The latest attempt to make someone’s personal life into content for the internet is something called a “college decision reveal.” What in tarnation?

In recent years there has been a massive uptick in teen vloggers and social media “influencers.” And who can blame them? You record a 9-minute video and gets thousands of views and likes. Then one day you’re getting paid to vlog and even signing endorsement deals like Olivia Jade Giannulli, the daughter of Lori Loughlin and Mossimo Giannulli who were busted in the college cheating scandal. But with all of the competition in the vlogger world, you need content. There is a recent trend in YouTubers making college decision reveal videos.

Generally speaking, people don’t like college or gender reveals of people they don’t personally know. Even the greatest basketball player of this generation was so arrogant to think that people were interested in watching his team reveal. LeBron James is still ridiculed nearly a decade later for his “Decision,” a 75-minute self-absorbed spectacle on ESPN.

Just in time for college admissions SZN, YouTubers are revealing what university they will be attending by sharing college decision reveal videos. Most of them utilize cupcakes as their vehicle to unveil their decision and they get messy because some hide the letters of their college in the cupcakes. That’s going to be a lot of cupcakes if you decide to go to the Alabama Agricultural and Mechanical University.

Nobody:
Vlogger: “HEY GUYS! I’M EATING CUPCAKES TO SHOW YOU THAT I’VE DECIDED TO GO TO FABER UNIVERSITY!”

YouTuber Emma Monden announced that she was going to USC, no word on whether she is on the crew team or not.

Most of the college reveal videos have tens of thousands of views, but this video by Brooklyn and Bailey has a mind-numbing 3.3 million views.

Meanwhile, kids who are attending community college are purposely doing “College Decision Conceals” to hide what crappy school they’re attending school. They don’t even eat the cupcakes!?!?! This is so bizarre.

I for one am excited about college decision reveals and the reveals that come next such as “Amount Your Parents Bribed To Get You Into College Reveal” and “I Dropped Out Of College To Focus On My Influencer Career Reveal.”

Then there are “College Acceptance Reaction” videos, which actually comes before the college decision reveal videos. This is where teens scream, cry and do that hand waiving to try to prevent tears from flowing as they brag about getting into elite schools such as Harvard.

I’m over here like, “Hey guys, today I’m doing my ‘What kind of tacos am I getting for Taco Tuesday’ reveal.”