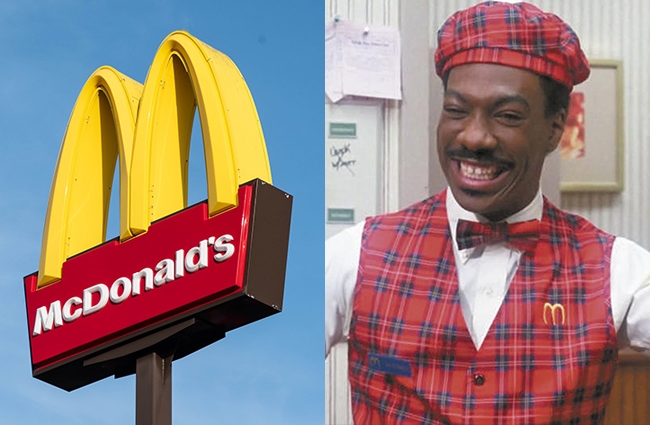 In the early 1980s, Eddie Murphy followed in the footsteps of Chevy Chase, Bill Murray, and Dan Aykroyd when he took his talents from Saturday Night Live to Hollywood, where he starred alongside the last man on that list in Trading Spaces in addition to embracing the buddy-cop movies that were all the rage during the decade with 48 Hrs. and the Beverly Hills Cop franchise.

However, I’d argue that his magnum opus is Coming to America, which centers around an African prince named Akeen who heads to New York City with his trusted assistant Semmi in search of a queen and decides there’s no better place to find one than in the borough named after female royalty.

Coming to America is a comedy classic featuring a number of incredible scenes, including one where Murphy plays a variety of characters engaged in a peak barbershop debate and another where he gets a vintage NYC response after saying good morning to his neighbors from a fire escape.

Akeem eventually finds a potential bride in Lisa McDowell, the daughter of the owner of a fast food restaurant he lends his family’s last name to. He’s a man who takes great pride in pointing out the differences between his establishment and the slightly more established chain that he totally, definitely didn’t take any inspiration from, where Murphy’s character gets a job in an attempt to woo the woman of his dreams.

The fake restaurant was actually a Wendy’s the was refurbished for filming, and while it may not have existed in real life, a place in Hollywood was responsible for some massive lines after it temporarily converted itself into a McDowell’s a few years ago, which is the closest fans of the film have gotten to get to experience it.

In the movie, McDowell complains about constantly being hounded by McDonald’s for ripping off its concept, but according to Variety, it appears the fast food giant may be embracing their fictional foe in the form of a collaboration in conjunction with Coming 2 America’s upcoming release on December 18th on Amazon Video.

The company reportedly paid $125 million to buy the rights to the film from Paramount, which may have an impact on negotiations that also include a rumored promotional push with Crown Royale. There’s no telling if this will be as successful as McDonald’s recent marriage with Travis Scott, but I for one am looking forward to finally getting my hands on a sandwich featuring two-all beef patties, lettuce, cheese, pickles, and onions on a bun with no sesame seeds.