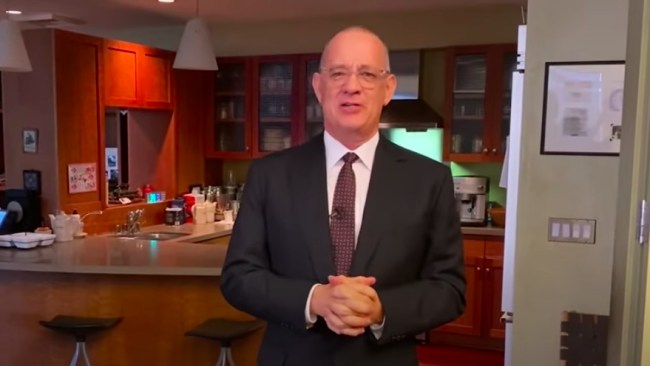 If you thought the most surprising thing to come out of Tom Hanks’ at-home monologue for Saturday Night Live was his underwhelming kitchen, you obviously haven’t been paying attention you mindless sheep.

Because if your eyes were open, you’d see that Hanks is a pedo with multiple accusers who has made multiple trips to Epstein Island and has been caught up trying to expose the cabal (Hollywood pedo ring). Open your eyes, sheeple.

That is the undying belief of self-proclaimed conspiracy realist and host of the No Mercy podcast, Tommy G.

Tommy spent the majority of Monday night convincing his 87,000 followers that Hanks’ appearance on SNL was “at best a complete lie and at worst it wasn’t even him.”

Let’s preface this by revealing that three days before it became public that Tom Hanks was infected with coronavirus, Tommy G recorded an entire podcast claiming Hanks to be a pedo and murderer of actor Isaac Kappy.

The thread begins with the following statement:

It then attempts to expose the sketchy aspects of Hanks’ SNL video:

I know u guys like these 20 part threads exposing stuff, but Im confident this one will end up being the most shocking & important of em all!

I do not think that was Tom Hanks i on SNL Saturday!

Does this kitchen look like the kitchen of a 26 million dollar mega mansion? I had an apartment at 21 which had a bigger kitchen! Not to mention that this DOOR is really weird? Looks like a greenscreen background in between 2 gov facility double doors! pic.twitter.com/3TjrIUDNmZ

10/ So the Kitchen is weird at worst, & he looks very crisp in front of a greenscreen background, but the next oddity is the things he says & does (we know they speak in code). In the video he says he is a Canary in a Coal Mine, which signals “I am in trouble” OR DEAD. pic.twitter.com/HKxy69eOol

12/ Oddly enough, I havent even gotten started yet!

We got some other weird oddities: Pic man w/ a hand over a childs mouth, corona typewriters, pencil sharpener, possible dude in back room, “Aussie Fan” vegamite & the other fan asking about “how he stays so young & in shape” pic.twitter.com/FheZLjqf72

Now we get to the good stuff. Tom Hanks says in 1st seconds of the video that his shaved head was “for a movie” & “its growing back slowly” & also says “this is my first time out of sweatpants in a month”. Ok, this is where he BLOWS IT! pic.twitter.com/SIT3w4PVPJ

16/ So he either A) shaved his head before March 12 & this is an old clip from PRE corona diagnosis ❌ B) he is in prison w his prison cut & prison double doors filming to keep ppl calm & slipped up ❓C) THATS NOT HIM ✅
Either way, something is NOW 100% wrong here! He’s lying!

20/ WTF? So then i went further and slowed it down manually

u will see he goes from skinny tom neck to jaba the hut neck & the bottom left jowl is ALL OVER THE PLACE. THIS IS A CGI PEOPLE! Don't have to be conspiracy theorist to see it!

Ok, the hair and the hands thing got me drinking the Kool-Aid. I don’t know what to believe about America’s Dad anymore.