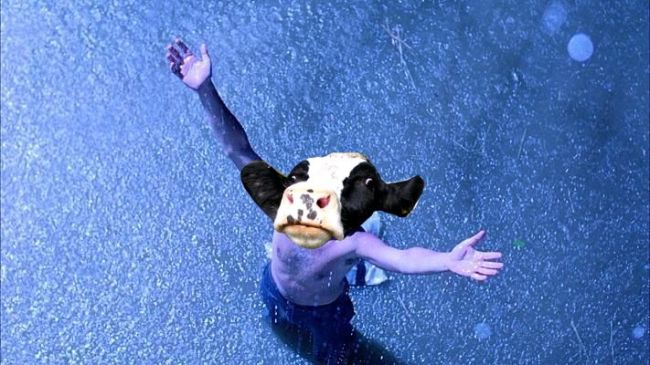 Writing about cows escaping Shawshank is going to be a difficult defense against my father’s claim that I don’t have a real job, but lucky for me, he doesn’t know how to open a Chrome window.

A herd of 40 cattle escaped a local slaughterhouse in Puerto Rico after the gate to the meat packing facility was left open, stampeding through the residential streets of Pico Rivera, according to KTLA.

Shoutout to all the cows that woke up and chose freedom in Pico Rivera. pic.twitter.com/6rzuzWTRaV

(Shoutout to the social media associate at the Pico Rivera PD who had to unironically tweet this).

Authorities were called shortly after 7:30 p.m. about several cows loose in the road on Beverly Boulevard, with footage from Sky5 showing at least 20 cows huddled together at the far end of a cul-de-sac.

Officials said one of the cows was shot by deputies as they worked to round up the livestock, claiming that it charged at a family of four, knocking some of them to the ground. Members of the family were taken to the hospital and treated with minor injuries.

“To protect the family from further injury, a Los Angeles County Sheriff’s deputy shot and killed the animal,” the Sheriff’s Department said.

It didn’t end there.

As authorities boxed the herd in at the end of the cul-de-sac and began loading them into trailers at 9:45 pm, three cows escaped and led deputies on a pursuit across town.

WATCH LIVE: These cows, wanted for hay-nous crimes, are hoofing it on the run from police in Pico Rivera. https://t.co/OUNOH2gNv4 pic.twitter.com/wNNa6iRapa

One of the cows remained unaccounted for as of Wednesday morning.

Let’s bring in the memes.

shout out to all the cows that got loose and are currently dicking around in pico rivera pic.twitter.com/ZYoysaMCNH

Me standing outside my home watching the Pico Rivera cows go by pic.twitter.com/cbutb0b2hm

Who’s rooting for the cows on Pico Rivera? pic.twitter.com/FX63ZDZg2i

Cops were definitely the wrong choice to corral the loose cows in Pico Rivera.

No one thought to call Phineas and Ferb given their expertise? 🤷🏻‍♂️ pic.twitter.com/TJerDHjX50

I think I’ll have chicken tonight.