Cricket Players Are Getting In Trouble For Spitting On The Ball 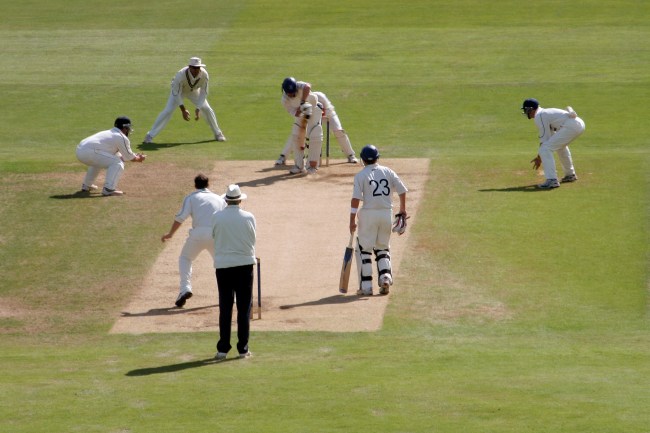 The umpires disinfect the ball after Dom Sibley admitted to accidentally using some saliva on it.

Gentle scoldings are in order on the cricket pitch. Dom Sibley was seen using his spittle to gussy up the ball before a pitch. Normally, surprisingly, that’s totally allowed—encouraged, even. But cricket’s governing body had to make some rule changes due to recent world events, and SWEAT is now the preferred ball gloss:

ESPN– With Dom Bess at the top of his mark, preparing to bowl the penultimate over of the session, the on-field umpires, Michael Gough and Richard Illingworth came together to examine the ball after Sibley himself had admitted to the accidental use of saliva to polish the ball.

Umpire Gough took out a disinfectant wipe from his pocket, and rubbed down the shiny side of the ball prior to handing it back to Bess…

According to the ICC’s revised playing conditions for this series, which is being played in a biosecure environment due to the Covid-19 pandemic, only sweat may be used to shine the ball. Saliva is considered a potential carrier of the virus, and so all players have been obliged to retrain their ingrained instincts, honed over many years of fielding.

“Ingrained instincts, honed over many years of fielding.” Sounds like a Planet Earth segment on praying mantises (manti?) What a ridiculously mystical sentence. We’re talking about SPITTING ON THE BALL, guys. I recognize that it may take some time to ween these dudes off their ball-shining technique, but let’s tone down the language a bit. Cricketers (cricketeers?) have been buffing the ball with loogies since time immemorial. You’d think that such a distinguished, custom-heavy game might have developed a different prep method from the way we treat genitals before sex when both parties have had a few too many drinks. Nope! Spit on it.

I feel about cricket the way a lot of people feel about golf: it’s obviously immensely popular, but I can’t be bothered to learn the rules. The twitter account that posted this story, @ESPNCricinfo, has 5.8 million followers. I’ve heard some games take days. You get to a point in your life where learning something new, of that depth and complexity, is simply not going to happen.

PS- whenever I see cricket highlights, they make me think of a guy who lost a bet, being forced to take a bat to a hornet’s nest. His buddies are there for moral support but he’s got the only helmet in the garage and drew the short straw when his fantasy team came up short week in, week out. Just where my mind goes.