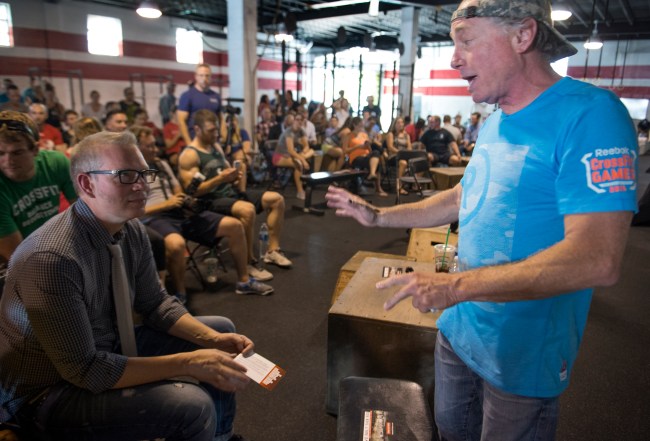 The CEO of CrossFit is stepping down after his tweet about George Floyd sparked a social media backlash and led to affiliated gyms and Reebok cutting ties with the exercise brand. https://t.co/oQs00FN3yJ

Officially statement from Greg Glassman on stepping down as CEO of CrossFit. Dave Castro to take over https://t.co/uUg9c9Odu5 #WEWS pic.twitter.com/3hqE5A7gOJ

It all started when Glassman responded to this tweet from the Institute for Health Metrics and Evaluation—a twitter handle so boring that it’s hard to finish, even reading it in your head.

If you’re confused by that response, so was I. Is it a joke? Like a pun? Is it synecdoche? What is synecdoche? In general, I like jokes about edgy topics. A good 9/11 joke (Louis), while extremely difficult to pull off, can serve as the masterstroke of a standup set. But a master comedian Greg Glassman is NOT. FLOYD-19 isn’t even a dad joke; it’s an absentee father joke. It’s a joke from a dad who is in and out of your life, showing up at random after two years with a bag of apples for the dinner table. Maybe that’s too much credit even. It’s the sperm donor of dad jokes, where one donor’s sperm accidentally fertilizes 400 eggs and Vince Vaughan plays that guy in a movie that goes straight to STARZ.

Fortunately for those confused like me, he clears it all up with his next tweet. Kind of.

Your failed model quarantined us and now you're going to model a solution to racism? George Floyd's brutal murder sparked riots nationally. Quarantine alone is "accompanied in every age and under all political regimes by an undercurrent of suspicion, distrust, and riots." Thanks!

Yeesh. He’s using his frustration with the institute for health metrics and evaluation’s model as a springboard for voicing his opposition to the riots? Do I have that right? I don’t even know anymore. Someone put Greg Glassman out to pasture.

Which, fortunately, they did.

Hours before he posted a controversial tweet on Saturday night that has sparked backlash against his company, Greg Glassman, CrossFit’s CEO and founder, told gym owners on a private Zoom call, “We’re not mourning for George Floyd — I don’t think me or any of my staff are,” according to a full recording of the meeting obtained by BuzzFeed News.

“Can you tell me why I should mourn for him? Other than that it’s the white thing to do — other than that, give me another reason,” he asked a Minneapolis gym owner who had questioned why the brand hadn’t posted a statement about the protests across the country after the death of George Floyd.

On Tuesday night, shortly after publication of this story, the company released a statement from Glassman saying that he had “decided to retire” and was stepping down as CEO.

At least he has another twenty years of chronic back pain and shoulder replacement surgeries to look forward to. That is assuming he drinks his own CrossFit kool-aid. Good riddance.