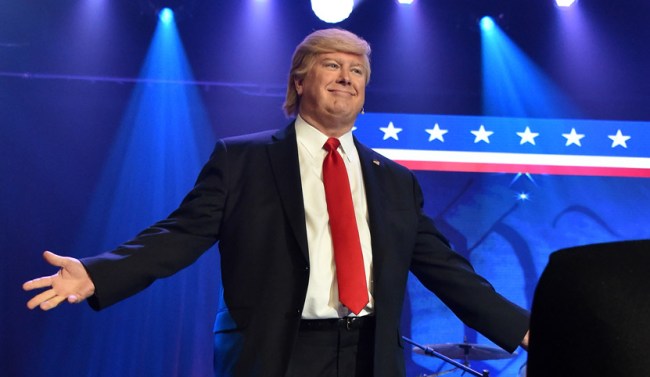 Back on October 1, 2016 Alec Baldwin hit a home run with the audience of Saturday Night Live with his first performance playing then Presidential candidate Donald Trump.

Baldwin would go one to portray Trump on throughout the Presidential election and beyond, gathering up loads of laughs with each passing appearance.

However, many people out there, including myself, wondered at the time, what happened to Darrell Hammond? After all, he had been portraying Donald Trump (and several other Presidents) for years on SNL and he just up and disappeared.

In a new profile on Hammond for the Washington Post, we get our answer. And that answer is heartbreaking and depressing as hell.

“I needed another force, on an acting level, to have the power that Trump was embodying then,” [Lorne] Michaels says. “The Darrell Trump . . . it wasn’t the Trump that had gotten darker. It was the Trump from ‘The Apprentice.’ ”

Hammond did not take the news well. It was all his girlfriend could do to get him back to his apartment.

“I just started crying,” he says. “In front of everyone. I couldn’t believe it. I was in shock, and I stayed in shock for a long time. Everything wiped out. The brand, me, what I do. Corporate appearances canceled. It was a hell of a shock, and all of it was apparent to me in one breath. That ends me.”

Hammond and his girlfriend remained in New York following his dismissal, but being in the city where he became famous only added to his depression.

His doctors prescribed him a beta blocker to calm his nerves and a second drug, Antabuse, to keep him from drinking. He stopped doing Trump in his stand-up sets. But the president-elect was impossible to avoid.

“I couldn’t get on an elevator, couldn’t walk through a lobby, couldn’t turn on a television, couldn’t walk down Broadway, couldn’t go to my favorite diner, couldn’t go anywhere,” Hammond says. “People would literally pull up in their cars on the way to Lincoln Tunnel to say: ‘What the hell happened? What in the world? Are you okay?’ Like, ‘Why would you give that job up?’ ”

What people, including many at SNL didn’t know, was that Hammond had also been cutting himself since he was a child after dealing with awful abuse by his parents.

Hammond was 19 and heading to college when he cut himself for the first time, a small slice on the wrist. By the end of his SNL run, his arms were covered in scars.

“Mainly, for me, it was about creating a crisis that was more manageable than the one that was going on in my head that had me clutching the carpet,” Hammond says. “By simply cleaning a wound and bandaging it you have broken the spell. It stops the flashback.”

Hammond even cut himself while working for Saturday Night Live…

In Hammond’s retelling, he’s backstage in his dressing room before his debate with Will Ferrell’s bumbling George W. Bush. Just before airtime, Hammond has a panic attack and can’t remember his lines. He lays out a gauze pad, slices his arm, patches the wound and puts on his finely tailored suit.

Thankfully, since moving out west and away from New York, Hammond seems to have gotten things back on track. He has even returned to New York and appears to have a whole new, more healthy perspective, “I got to play him. It went really well when I did. Times change, right?

Check out the video below and then go read the entire very in-depth and fascinating piece on Hammond here.