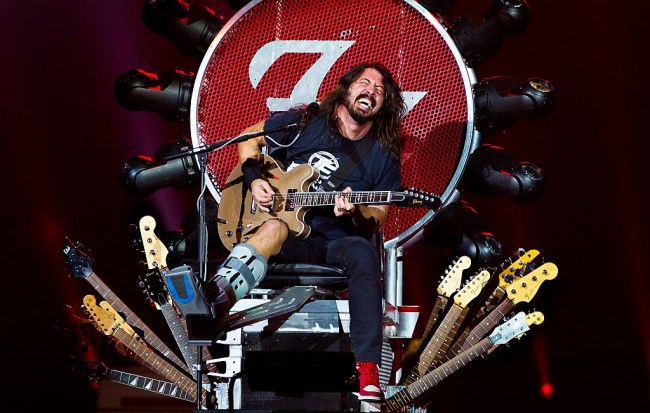 Dave Grohl saves the day for a fellow musician (again). The Foo Fighters frontman didn’t let a little thing like a broken leg stop him touring in the past because he had a guitar throne constructed. This week, Grohl lent his rock throne to Old Dominion’s Matthew Ramsey so the band could continue their tour despite the guitarist having a bum leg.

Back in 2015, Dave Grohl fell off the stage during a concert in Sweden and seriously injured his leg. But being the rock god that Grohl is, Dave got patched up and then proceeded to perform an entire Foo Fighters’ concert with a broken leg.

RELATED: Watch Dave Grohl Chug A Beer Then Fall Off The Stage In Foo Fighters’ First Concert Of 2019

In ended up that Grohl snapped his fibula and dislocated his ankle. He was forced to cancel five Foo Fighters concerts, but then continued the band’s European tour thereafter. He was able to rock out thanks to a throne made of guitars modeled after the Iron Throne in Game of Thrones.

.@foofighters returned to the stage last night, with Dave Grohl performing on a throne. Legend. pic.twitter.com/UWAaCKsPjx

Finally, Grohl healed and didn’t need the rock throne any longer. Then more than a year later, Axl Rose broke his foot at a surprise concert in Los Angeles. This was the start of the Guns N’ Roses Not In This Lifetime Tour in 2016. Grohl lent his throne of guitars to Axl so Guns N’ Roses could continue their tour.

Now, Old Dominion was contemplating canceling some shows in Florida and Georgia because their guitarist Matthew Ramsey was still recovering from a leg injury after falling off the stage according to PEOPLE. Ramsey had to have surgery on his leg and has been on crutches ever since.

“So many jokes were thrown around about using Dave Grohl’s throne, finally we just decided to ask and see what happened,” Ramsey told PEOPLE. “I’m sure Dave didn’t know that when he created this thing, everyone would want to use it. But, it has been an honor to sit on, and more importantly, it’s allowing us to keep the show on the road. Our fans are truly grateful. We owe him big for that.”

Old Dominion posted a photo of the guitar throne on Instagram with the caption: “First show post-surgery is going down with some help from our friends #davegrohl and @foofighters !!! #rockthrone #theshowmustgoon.”

Here is the rock throne in action during an Old Dominion concert last week.