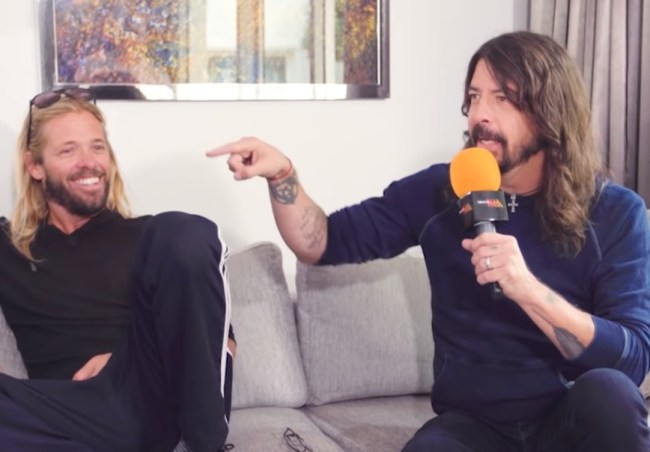 Dave Grohl has been a world-famous rocker for nearly three decades since he was the drummer for Nirvana and then the frontman for the Foo Fighters. With so many tours and rock fame, Grohl has a lifetime of amazing stories. Grohl recently told the greatest road trip story ever and it includes strip clubs and missing wallets.

Grohl and fellow Foo Fighters’ bandmate Taylor Hawkins gave an interview to Jane Kennedy, a radio host in Australia. Dave gave the radio host an option to ask all of her list of questions or “I can tell you the funniest story you’ve ever heard of in your life.” Jane wisely chose to hear the epic road trip story. You can read what happened, but Dave tells a better story in the video.

In 1998, Ozzfest was held at Milton Keynes Bowl in England. Korn was supposed to perform on the main stage, but they canceled. The Foo Fighters got a call to replace Korn, but they didn’t think they were “metal enough” to be on Ozzy Osbourne’s heavy metal festival and “we’ll get killed.” But the opportunity was too good to resist and they agreed to play at OzzFest.

RELATED: Dave Grohl Reveals His Dream Band He’d Want To Play With And The Hollywood Actor Who Would Be Perfect To Play Him

“We’re totally terrified,” Grohl says. “We get to the gig, Pantera is playing and they are the most shredding metal band you’ve ever seen. There’s 60,000 people going f*cking bananas, and we gotta go up after them. As I look around the side of the stage as we’re playing and see all those guys singing the lyrics to our song. I’m like, ‘this is amazing!'”

The Foo Fighters make friends with the dudes from Pantera and Dave says, “They’re all about whiskey and boobs.” Pantera invited the Foo Fighters to the strip club they owned called “The Clubhouse” that’s outside of Dallas, Texas.

Foo Fighters finished their tour later that year. Grohl was living in Los Angeles at the time and was moving back to his home state of Virginia. Grohl and Taylor did a “Dumb & Dumber drive across America.” But they plotted their cross-country trip based on where their friends live and where the strip clubs are. They stopped in the small desert town of Barstow, California to get gas. They then drove to Phoenix, Arizona, that night and Dave realized that he left his wallet on the gas tank when he tried to check into the hotel.

Grohl called his accountant to have them send him a credit card. Grohl called the guys from Pantera and tells them that he’s coming to visit their strip club in Texas. Dave and Taylor make an 800-mile detour to check out Pantera’s strip club. They visit Taylor’s family in Fort Worth, Texas during the day and then head to The Clubhouse at night.

“WE DIDN’T GET IN! WE DIDN’T F*CKING GET IN!” Grohl screams. Taylor references Dave’s time with Nirvana and adds, “You ever heard this song, Smells Like Teen Spirit?”

Over ten years after Dave Grohl got denied at Pantera’s strip club, the Foo Fighters’ frontman was at a surf shop north of Los Angeles. He was with his daughter buying something when the girl at the counter asked him, “Are you Dave Grohl?” Dave says, “Yes.” The girl then asks, “Did you lose your wallet in Bartsow in 1998?” Dave says, “Yeah!” The girl explains, “That was my parents’ gas station.” Dave replies, “You’re kidding me!” She says, “No. They still have your wallet.”

Grohl gave her his address and they sent him his wallet with “f*cking everything in it from 1998.” Best road trip story ever.