DEA Just Seized, In One Bust, Enough Meth For ‘Every Man, Woman, And Child’ In The U.S. And Mexico 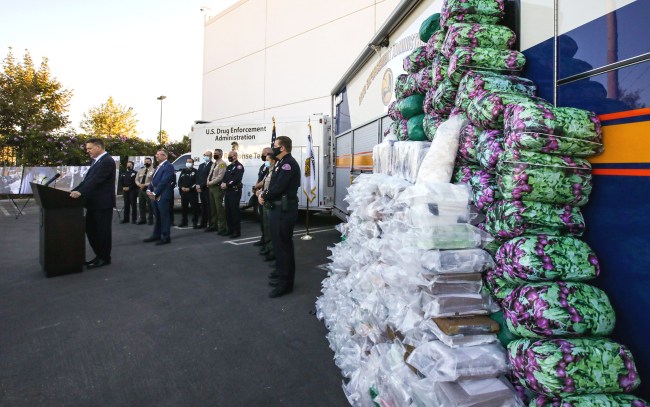 I am almost positive this record-setting drug bust is supposed to be filed under bad news, but, well, it’s 2020 so I have lost track of what all the rules are anymore.

On Wednesday, the Drug Enforcement Administration announced the largest domestic seizure of methamphetamine in DEA history.

It included 2,224 pounds of methamphetamine, 893 pounds of cocaine, and 13 pounds of heroin.

The operation, which took place in California, was the result of an investigation into a large-scale drug-trafficking organization with ties to the Sinaloa Cartel, the DEA said in a statement.

“These two seizures are more than enough to provide a dose of meth for every man, woman and child in the United States and Mexico,” said DEA Acting Administrator Timothy J. Shea.

According to CBS Los Angeles, some of the drugs were concealed inside duffle bags and reportedly passed between cars in public, including in a Sam’s Club parking lot in Moreno Valley.

After the encounter at the Sam’s Club parking lot, the officers got search warrants for two suspected stash houses — one in Moreno Valley and the other in Perris. Between the two homes, detectives seized 25 duffle bags of drugs containing 2,200 pounds of meth, 460 kilograms of cocaine and six kilograms of heroin.

“Someone who’s responsible for this quantity of drugs is someone who is very, very trusted by the cartel,” Bill Bodner, the special agent in charge of the Los Angeles DEA, said.

“The largest DEA domestic seizure of methamphetamine in history is a significant blow to the cartels, but more importantly it is a gigantic victory for communities throughout Southern California and the United States who have had to deal with the torrent of methamphetamine coming into their neighborhoods,” said Shea.

Hundreds of pounds of methamphetamine were seized in a series of raids in Riverside County earlier this month, the largest such meth seizure in DEA history. https://t.co/VQubK7OF3G pic.twitter.com/ORgZhhrXrd