Demi Lovato Says ‘Alien’ Is A Derogatory Term For Extraterrestrials, We Should Stop Using It 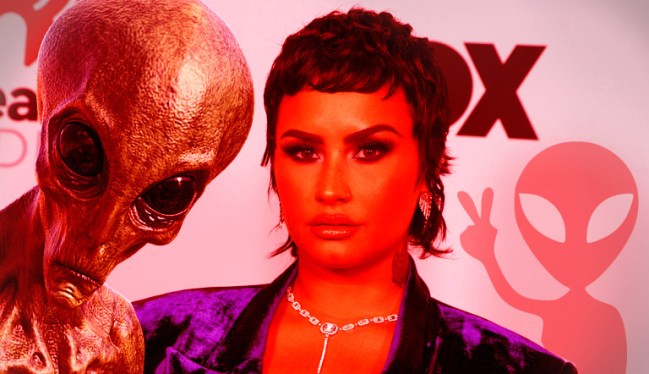 Demi Lovato, who has been very open about having encounters with aliens, including a “beautiful and incredible experience” with aliens while in the desert in Joshua Tree, is in no way trolling the American public when she says the term “alien” is offensive and shouldn’t be used anymore when referring to beings from other planets.

In a new interview with Pedestrian, Demi Lovato says she doesn’t think any creatures from outer space intend to do us any harm so we should stop using the “derogatory” term “alien” when discussing them.

“I think that if there were beings that could harm us, we would have been gone a long time ago,” Lovato explained.

“I also think that if there are civilizations that are of consciousness in other dimensions, which has given them the technology to be able to travel through space, I think that they are looking for nothing but peaceful encounters and interactions because like I said, if they wanted us gone, we would have been gone a long time ago!”

Lovato, who is currently starring in a new show on Peacock called Unidentified With Demi Lovato, added, “Why would they want our planet when we’re running it into the ground?”

The pop star says that’s among the many misconceptions about UFOs and aliens that bug her the most.

“I think the ones that bother me are that they’re harmful or that they’ll come and take over the planet,” said Lovato

“I really think that if there was anything out there that would want to do that to us, it would have happened by now. But I think that we have to stop calling them aliens because aliens is a derogatory term for anything. That’s why I like to call them ETs! So yeah, that’s a little tidbit. A little information that I learned.”

“I think that the world is becoming a more open place,” added Lovato. “Slowly, but surely, I think that we’re making progress. And we’re slowly getting there. But, you know, any progress is progress!”

Unidentified with Demi Lovato is an unscripted series that follows Lovato and their skeptical best friend Matthew and their sister Dallas, as they search for the truth about the UFO phenomena. While consulting with leading experts, Demi, Dallas and Matthew will investigate recent eyewitness encounters, uncover secret government reports, and conduct tests at known UFO hot spots.