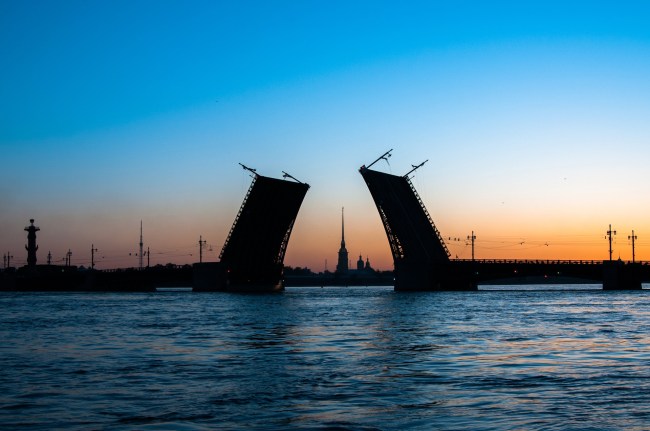 Police are describing an incident in Detroit like a stunt straight out of the Dukes of Hazzard or The Blues Brothers when the protagonists try and evade police by jumping their cars over an open drawbridge and land on the other side.

In this instance, instead of some sharp-eyed protagonist behind the steering wheel, there was a driver who was apparently under the influence of ‘whippets’, aka nitrous oxide, which is most often huffed/inhaled after the NO2 canister is emptied into a balloon. They’re often sold outside of a Phish concert after the show is over and fans are spilling out into the parking lot but they can be purchased an abused in any number of ways. Not that I know anything about that.

The driver apparently plowed through the Fort Street Bridge security gate and launched over the open bridge before landing on the other side where they were hit with ‘malicious destruction of property and reckless driving’ according to CNN.

“These pandemic times have seemingly brought out the worst in many Michigan drivers.” Wayne County Prosecutor Kym Worthy said in a statement. “The rules of the road [are] the same and there is no place for drivers who refuse to follow them and instead try alleged stunts like this.”

A call from police called the incident something out of “The Dukes of Hazzard,” an action-comedy series that featured multiple car stunts, according to CNN affiliate WDIV. The main car in that show was the ‘General Lee’, an orange 1968 Dodge Charger. Police told WDIV they suspect the driver was under the influence of “whippets,” or canisters of nitrous oxide sometimes used as inhalants.

Drawbridge operator Andre Locke witnessed the stunt, which he said reminded him of “The Blues Brothers.” In that movie, a car jumps the 95th Street Bridge in Chicago. “I looked and I said, ‘No he ain’t,'” Locke told WDIV. “I hit the emergency spot and the bridge jammed.” “Over he went, blew out all four of his tires, and then he crashed into the other gate,” he added. (via CNN)

We’re not talking about a tiny little bridge here. He shattered his windshield from the impact, naturally. It’s not as if this was a high-performance vehicle either. Or a new car. I think this all went down exactly how you’d expect it to have unfolded based on the details above.

Here’s a look at the bridge and the damage:

I remember 3 or 4 years ago there was a driver in New Jersey who was with his family and had to gun it when the bridge started opening up out of nowhere as he was driving and it turned out the bridge operator(s) were at fault. This is nothing like that, of course, but it’s not unheard of for drivers to jump bridges is I guess what I’m getting at here. Sometimes they do it because they’re on whippets and sometimes they do it because they’re trying to save their family’s lives. Potato-Potato/Tomato-Tomato.