DJ Pauly D And Vinny Dropped A Trailer For Their Version Of ‘Bachelor’ On MTV And I Need To Know Who Asked For This?! 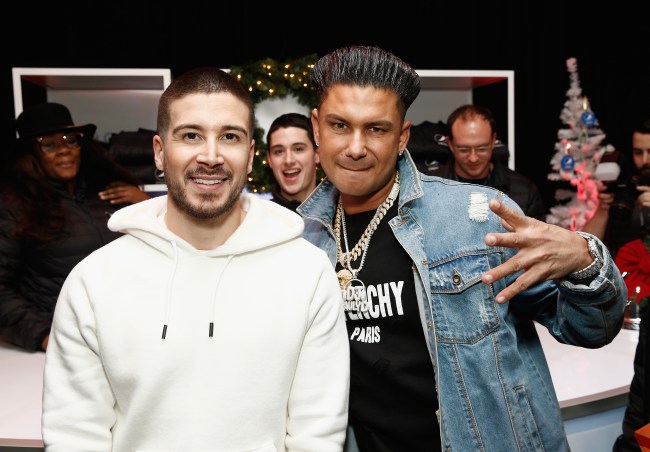 Let me just kick this off by saying I’ve never seen a single episode of The Bachelor in my life. Also, I watched the first two seasons of Jersey Shore with my roommates at the time and we’d turn each episode into a drinking game, but I didn’t stick around for Family Vacation, Snooki & JWOWW, The Pauly D Project, or any of the other spinoffs.

MTV’s Jersey Shore was (and is?) scripted. It was entertaining enough early on because the curtains were pulled back on one of the douchiest cultures in America. But then they just kept going with the schtick. On and on. And it’s still going on to this day. I’m not trying to knock

DJ Pauly D and Vinny Guadagnino, who always seemed like the comparatively normal and quasi-nice guys of the crew, just dropped a trailer for their new Bachelor-style dating show on MTV. The show will be called Double Shot at Love and it premieres on ‘Jerzday’, April 11th.

🚨🚨New Show Alert 🚨🚨I’m sharing a house with my man @vinnyguadagnino and 20 women…what a country!🙌 The season premiere of @MTVShotAtLove is coming at ya on Jerzday, April 11th! pic.twitter.com/LU2yZ1fKRr

Here’s what the format will look like according to PageSix:

The new show features 20 hopeful women who will compete to be Pauly and Guadagnino’s respective “ride or dies.” While the men may get to choose who stays and who goes, the women get to decide whose love they’re competing for.

It was announced in January that the duo would be getting their own dating show. Shortly after, Pauly, 38, tried to find love on MTV’s “Game of Clones” but was unsuccessful. (via)

I guess there’s an audience for this? I don’t have a fucking clue who that audience is. I can’t imagine who asked for this show other than the actors because it’s an easy paycheck for them and a chance to stay on camera.

Listen, none of this is a knock on the Jersey Shore cast and crew. I’m sure they’re nice people and most of them have had tremendous success which doesn’t come easy, my hat’s off to them for keeping it going this long. But seriously, who in the actual fuck wants to watch this show? It’s a scripted/fake reality dating show about a 38-year-old (Pauly) and a 31-year-old (Vinny) who have been plowing their way through places like South Padre Island and Panama City Beach for the past decade.

Am I really that detached from pop culture at this point that I think this looks like the biggest steamiest pile of guano to ever grace our airwaves? Or is there at least one of you guys out there who will agree that this dumpster fire needs to end?