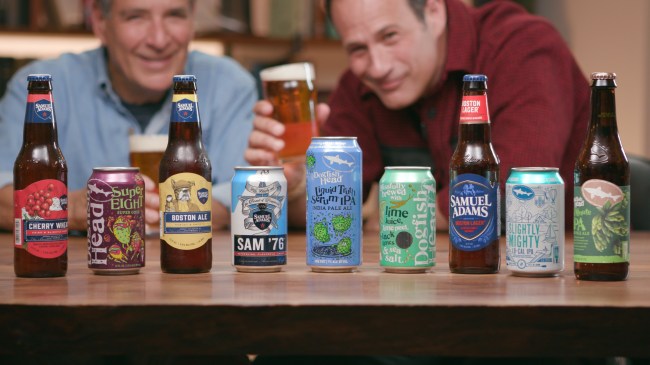 Jim Koch’s Boston Beer being one of the first east coast breweries to be called a “craft beer.” Sam Calagione, the founder of Dogfish Head, opened his brewery near the Delaware beaches in 1995.

The merger is estimated to be worth $300 million. Sam and Mariah Calagione, his wife, will receive more than 400,000 shares of Boston Beer’s stock in the deal, which is valued at $314.60 per share. That means that the Dogfish Head founder is receiving $125,840,000 personally in stock value from the deal.

According to a press release, Dog Fish Head will retain it’s name and still be a craft brewery operating out of Milton, Delaware. Dogfish Head is “on pace” to sell 300,000 barrels of beer in 2019, with net sales of about $120 million, according to the release.

Brewbound has financial details about the merger, including what Dogfish Head stake holders will be receiving from the deal:

Meanwhile, existing Dogfish Head shareholders will receive $173 million in cash, and Sam Calagione will obtain a seat on Boston Beer’s board of directors starting in 2020.

As a result of the merger, LNK will exit its investment in the Delaware-based craft brewery.

Dogfish Head founder Sam Calagione will join Boston Beer’s board of directors. The deal will also help streamline the overall supply chain for both brands. This could help Boston Beer Co. disrupt Yuengling’s reign at the top of the independent beer world.

Calagione, who noted that Dogfish shares about half of its wholesalers with Boston Beer, said the two companies would also look to “align distribution geography everywhere it makes sense.”

“Both of our companies sell 99 percent of what we make through the three-tier system,” he said. “It is a challenging moment where beer is not growing to the degree that all three tiers wish it was, and we can be great advocates to help bring beer back to growth in America.”

Personally, this is wild to see. I grew up vacationing in Dewey Beach every summer, where Dogfish Head gained early traction in the ’90s before it’s massive expansion. It’s beyond badass to see a little craft brewery grow into a force to be reckoned with all while retaining their roots and values.

Meanwhile, not everyone is sharing the same optimism. Dogfish Head, the 13th biggest craft brewery in terms of scale, is widely regarded brand of innovators in the beer world. Others are happy it’s an exit that didn’t involve massive corporations like MillerCoors or InBev.

I just keep picturing in my head the different Sam Adams and Dogfish Head beers in the Publix beer aisle near my parents’ house and now thinking, holy fuck, that’s all one company now.

I keep seeing people referring to it as a merger, but buying out Dogfish Head with $300M in Sam Adams shares sure looks like a sale. A great match in both focus and culture.

Sam Adams is definitely not “great.” It likely won’t have an impact on the quality of Dogfish Head, but disappointing to see a giant absorb a smaller brewery. But upside is presumably wider distribution which is nice.

Praying that Dogfish’s more funky choices don’t go by the wayside. Those were the beers that attracted me to them in the first place.

This is great news. Too many local craft brews have wound up being bought by the likes of Anheuser-Busch and Miller Coors. Boston Beer Company has been a great supporter of local craft brewers, but the haters would need to do 5 minutes of research to know that.

In the past few years, there has been an intense amount of consolidation among many craft breweries in the U.S. More than a dozen of our peers have sold to international conglomerates, others have come together through platforms bringing a handful of craft breweries together in roll-ups. While neither of those strategies appealed to us, we did realize that Dogfish Head would be a stronger company with the support of our friends at Boston Beer, and vice-versa.

As many of you know, we have been a staunch supporters of independent craft beer in the U.S. In fact, both Boston Beer founder Jim Koch and Dogfish founder Sam Calagione worked hard with other leading craft brewery founders and the Brewers Association to develop and champion what defines independent, small American brewers. Our merged company’s status as an independent craft brewery is very important to all of us and allows our co-workers to continue growing within this definition for many years to come. Together, we’ll be better positioned to compete with larger international beer conglomerates that are more than 50x our size, despite our combined company’s volume representing less than 2% of the beer sold in the U.S.

Cheers to getting the deal done, guys. Beer on… Both of you.