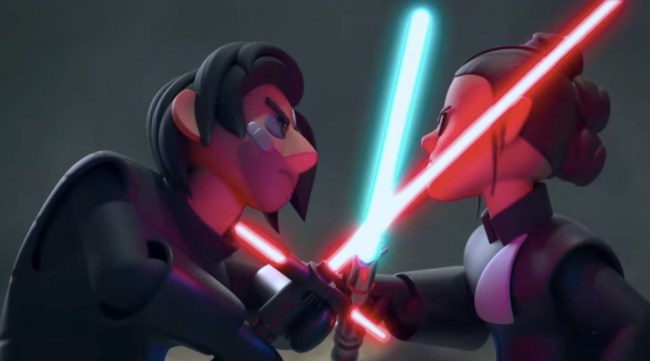 When The Rise of Skywalker originally came out, I found the criticism to be relatively harsh. I felt it had something of a self-fulfilling-esque property to it: people were hating it because they wanted to hate it.

Don’t get me wrong, I was rather critical of the film from jump street — I’ve written hundreds upon hundreds of words about how truly haphazard Disney’s 9th inning inclusion of Palpatine was — but after leaving the theater, I didn’t find the movie to be the utter abomination that everyone else considered it to be.

But then I rented it over the weekend, and, woooooo buddy, I couldn’t even get through the first hour. Turned it off and ate the five bucks. The film — which is being kind, as it’s more of a Franchise Frankenstein Monster — is far, far worse than I remember it to be.

Look, I get Carrie Fisher and the Princess Leia character are iconic, but on second viewing, you can feel how deeply out of place her scenes feel, almost as if the entire film was retrofitted around those moments. The dialogue stinks to high hell — from Poe and Rey’s manufactured adversarial banter to the now-infamous “They fly now? They fly now?! They fly now!” — it’s all a mess.

Check out this clip from #StarWars: #TheRiseOfSkywalker. See it in theaters December 20. Get your tickets: https://t.co/EbJ0vDHKyt pic.twitter.com/ZAzp77ZLz0

Then, of course, there’s that whole Palpatine thing, which I’ve already complained about enough for one lifetime. Don’t even get me started on all the horseshit in the novelization, either.

To make matters worst, the original Episode 9 script from Colin Trevorrow — the Jurassic World director who was the first director attached to the project — leaked online and it turned out to be pretty fucking awesome.

Titled Star Wars: Duel of the Fates — named after the iconic John Williams track from The Phantom Menace — Trevorrow’s script presented a much clearer conclusion to the Skywalker Saga.

Thankfully, for as poor as The Rise of Skywalker is, The Mandalorian ended up kicking ass and returns this October to Disney+.