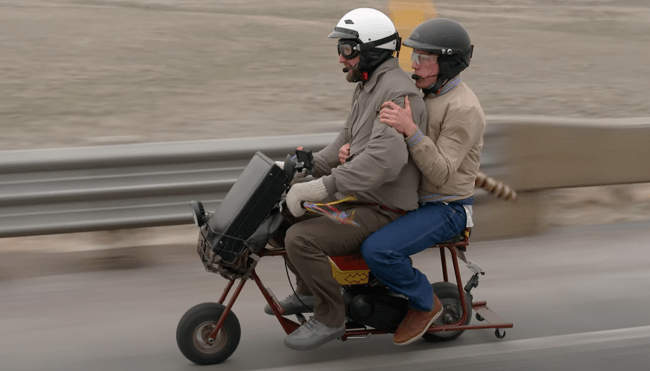 When Conan O’Brien closed out his final show on late night television, he perfectly summing up his brand of comedy as “a pursuit to do things that are kind of stupid but have something smart in there somewhere and then there’s a little, tiny sort of flicker of what is a kind of a magic.”

The host is far from the only person who’s taken a similar approach to getting laughs, and I can’t think of a better way to describe the essence of the oeuvre of Peter and Bobby Farrelly—especially when it comes to their magnum opus. The siblings commonly referred to as “The Farrelly Brothers” made a name for themselves in the 1990s and put Rhode Island on Hollywood’s map with There’s Something About Mary, Me, Myself, & Irene, and, of course, Dumb and Dumber, the movie that started it all.

Dumb and Dumber is a brilliantly juvenile and infinitely quotable vehicle that features Harry Dunne and Lloyd Christmas using a couple of iconic vehicles to make the trek from Providence to Aspen while evading the hitmen tasked with tracking down the cash-filled briefcase that served as the catalyst for their road trip to Colorado.

The bulk of their journey takes place inside the sheepdog-inspired Mutt Cutts van that is eventually replaced by the minibike Lloyd traded for to totally redeem himself after accidentally driving the duo to Nebraska (and wrongfully accusing John Denver of being full of s—t upon arrival).

Two different minibikes were used during the filming of Dumb and Dumber. One ultimately ended up in the hands of Planet Hollywood, while the other was given to a crew member who kept it in storage for a couple of decades before it popped up at an auction a few years ago.

While Jim Carrey and Jeff Daniels didn’t actually travel hundreds of miles on the back of the glorified scooter during filming, the same cannot be said for two guys who built a replica of the hog and documented the trials and tribulations that come with riding tandem on a minibike for 380 miles.

CTXP’s Ari Henning and Zack Courts recently uploaded a 30-minute video of their epic adventure on YouTube (the latter also recapped it in a slightly more digestible article), and it is one hell of a ride.

While they managed to arrive in Aspen relatively unscathed, they were unable to have a cane fight while clad in hideous tuxedos on the steps of a hotel or recreate any other aspects of the final act due to the fact that none of the movie’s scenes were actually filmed in the resort town.

However, in this case, it’s really more about the journey as opposed to the destination.