Ella Emhoff, The Second Daughter, Signs Modeling Contract Based On What She Wore To The Inauguration 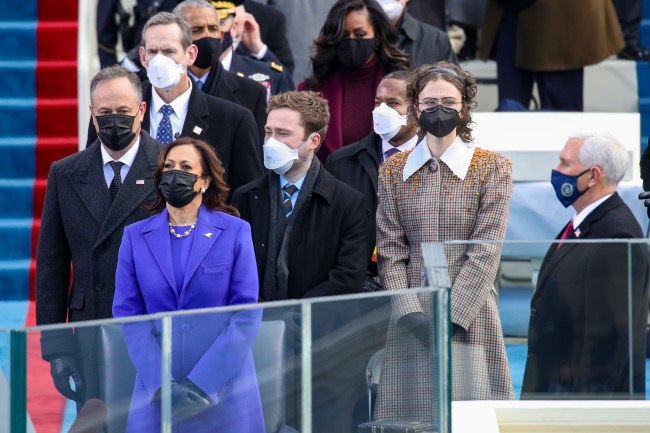 Ella Emhoff, the stepdaughter of VP Kamala Harris, just got signed to IMG models. And apparently, her outfit choice for the inauguration, as well as her “cheeky” disposition, caught the eye of IMG Models’ president, Ivan Bart.

“It’s not really about shape, size or gender any more,” said Ivan Bart, the president of IMG Models, noting that what brands are attracted to, and what consumers want, is authenticity. “Ella communicates this moment in time. There’s a cheekiness and a joy she exudes.”

And, he said, when he saw her at the swearing in, he thought, “Wow, she’s communicating fashion.”

“What she wore and who she was that day was in line with the person I met,” Mr. Bart said. “That’s why everyone noticed her.”

First of all, I don’t know how I missed the eyebrow wiggle. That’s one of the greatest things I’ve ever seen. I haven’t seen someone communicate with their eyebrows like that since Dwayne Johnson was a wrestler. Absolutely diabolical wiggling. What a choice! Masks obscure the bottom half of the face, and everyone knows the mouth is the most communicative feature we have. Frown, smile, pursed lips, open wide… it says so much. Not to be deterred, Ella still says SO much with her forehead caterpillars. Cheeky indeed!

I absolutely love this woman and I don’t know her at all. That said, I would be so completely out of my element if we ever met. Putting together five words, let alone a coherent thought, would be a challenge. We’re talking cotton mouth, heavy tongue, stroked-out word vomit until she walked away. I don’t know what it is but she’s just totally out of my league.

It’s definitely her confidence, her assurance of self. When I was 21, I wore clothes for the express purpose of toning down my loud personality and flaming orange hair. Black or navy t-shirts, jeans, call it a day. Try not to ruffle feathers or announce myself. I bring way too much energy to the table already. Let’s keep it simple and hopefully, enough people find me tolerable that I get invited back to next week’s coed flipcup gathering.

Not so for Ella Emhoff. She is who she is and she knows she’s fly as hell.

Ms. Emhoff throws a crocheted grenade at the image of typical D.C. political offspring, with a style that could be termed Wes Anderson chic. In her selfies, she doesn’t wear much makeup and doesn’t carefully blow-dry her naturally curly hair. She shows off her armpit hair and cartoonish tattoos, which include eggs and bacon in the shape of a smiley face and a cow.

She isn’t sure how many she has. “Maybe around 18 now,” she said, including many she did herself during quarantine and some that her parents “may not know about.”

A salute to you, Ms. Emhoff. Here’s to your continued success and self-expression in the worlds of fashion and modeling.