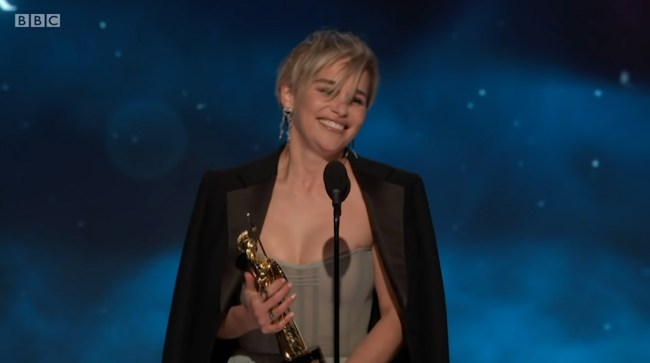 Emilia Clarke beat numerous other actresses out for the role of Daenerys Targaryen on Game of Thrones partly because she did The Robot in her final audition. Seriously.

Back in 2010, Emilia Clarke, was 22-years-old, and has so far appeared in one episode of the British soap opera Doctors, a TV movie called Triassic Attack, and a short film titled Drop the Dog. So she wasn’t exactly what you would call a “household name.”

This past weekend she took home the Britannia Award for British Artist of the Year. What a difference a decade makes. (And we’re guessing that Jason Momoa was very excited about it.)

While presenting Clarke with her award, Game of Thrones co-creators David Benioff and D.B. Weiss told a story about Clarke’s auditions to play the Mother of Dragons.

The explained that even though they had already shot the pilot with Clarke in the role, she was asked to audition again for the president of HBO, reports Variety.

The meeting took place in “HBO’s corporate theater, which was large, dimly lit and empty except for us two and the president of HBO,” Weiss said. “We were smiling. He wasn’t. It was quite possibly the least inviting audition environment we had ever witnessed.”

“Emilia asked if there was anything else she could do to lighten the mood and David asked, ‘Can you dance?’ And without missing a beat, Emilia did the robot,” Weiss said. “She did it with commitment and she did it well…and even the president had no choice but to smile. She got the job 10 seconds after she left the room and the two of us ran to tell her before she left the building because letting her get on an 11-hour flight home without knowing seemed like cruel and unusual punishment.”

During her acceptance speech, Clarke commended the Game of Thrones showrunners for giving her the role considering where she was in her career at the time.

“They actually deserve their own bravery award for hiring someone whose biggest job up until then was catering parties dressed as a Snow White,” she joked.

So, as Clarke pointed out, be nice to people because you never know if they might be thanking you in a speech someday.