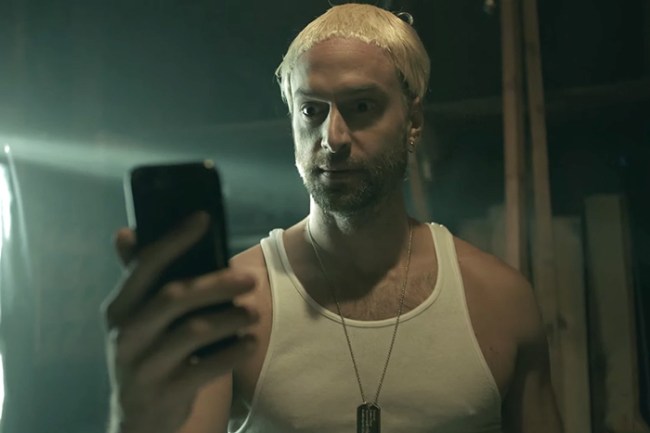 Eminem and Chris D’Elia have been going back and forth for months now after the comedian’s impression of the legendary rapper went viral earlier this year. Now the Slim Shady imposter is finally on a music video with the real Eminem.

It all started in February when Eminem tweeted out D’Elia’s video of Eminem rapping. Marshall Mathers was so impressed by the freestyle that he said: “I thought it was me!”

This is INCREDIBLE!!! 4 a second I actually thought it WAS me!! @chrisdelia https://t.co/51Vop6aucO

Then last month, Eminem and D’Elia agreed to a rap battle. Eminem said on Twitter: Me and @chrisdelia are gonna battle one day #Homicide @Logic301.”

Me and @chrisdelia are gonna battle one day #Homicide @Logic301 pic.twitter.com/hhZr006hfx

Now we know why he tagged fellow rapper Logic in the tweet and referenced “Homicide.” Eminem and D’Elia both appear in Logic’s music video for Homicide.

Homicide, the track from Logic’s recent album Confessions of a Dangerous Mind, not only features Chris D’Elia as Eminem’s stunt double, but also adds more doppelganger goodness by recruiting Squints from The Sandlot appearing as Logic.

Chauncey Leopardi, who played Squints in the classic baseball movie The Sandlot, portrays Logic in the music video as D’Elia is Eminem. Then Eminem impersonates Chis D’Elia impersonating Eminem. Meta on meta on meta.