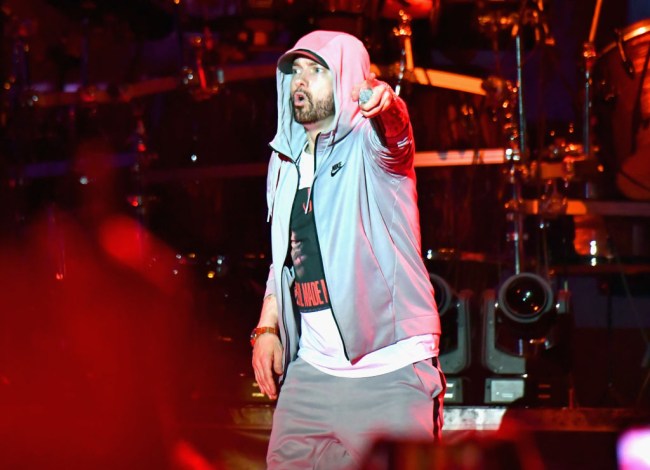 The video went viral and amassed over 1.1 million views on Instagram. Eminem got wind of the parody rap video and praised the imitation by tweeting, “This is INCREDIBLE!!! 4 a second I actually thought it WAS me!”

This is INCREDIBLE!!! 4 a second I actually thought it WAS me!! @chrisdelia https://t.co/51Vop6aucO

Things have escalated quickly because Eminem included the imitation at the end of new single Homicide with Logic. “Me and @chrisdelia are gonna battle one day #Homicide @Logic301,” Eminem wrote on Twitter.

Me and @chrisdelia are gonna battle one day #Homicide @Logic301 pic.twitter.com/hhZr006hfx

D’Elia happily accepted the invitation to a rap battle against the Rap God and even offered to “bring the napkins” because he’s such a considerate gentleman.

On Instagram, D’Elia said, “Slim Shady himself called me out?! I accept! Swipe left.”

D’Elia did an interview with Billboard about the sample on Marshall Mathers’ new track and his manager asked him about asking Eminem for money for the sample because that’s what managers do.

“My manager called me five or six days ago and said, ‘Listen, you know the rapper Logic?’ I was like, ‘Yeah I do,'” D’elia said. “And he said, ‘Well Eminem has a new song coming out with him, and Eminem put you on the song, and they want to know if it’s okay?’ And I was like, ‘Are you f*cking kidding me?'”

Let’s hope the rap battle between D’Elia and Slim Shady is civil and they leave out the innocent mannequins and Harrison Ford.

This funniest shit I’ve seen all day g. He say this how Eminem raps. pic.twitter.com/9lc8cWA5yd