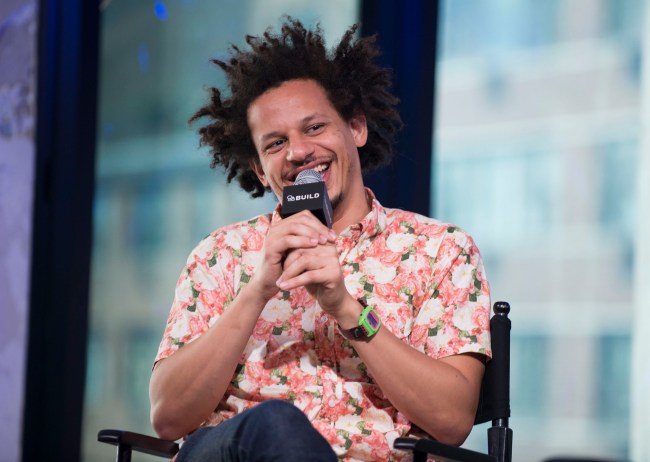 Move over, Tom Cruise! Eric Andre does his own stunts too, and getting a knife pulled on you seems a lot more dangerous than jumping off a building with the comfort of safety harnesses, ropes, and super strong dudes belaying you to the ground:

Comedian Eric Andre (@ericandre) had a knife pulled on him while he filmed his new hidden-camera comedy, @netflix's "Bad Trip" (@BadTripTheMovie).@joshrottenberg tells the story https://t.co/wBb3TC5WqK

“There’s always, like, this primal fear,” said Andre, who has been arrested and injured in the course of doing pranks on “The Eric Andre Show.” “You’re going into an unpredictable situation, dealing with completely unpredictable people, and the threat of violence is always there.”

Early in the shoot, Andre and Howery had a knife pulled on them by an enraged business owner as they tried to pull off a prank in which their penises were supposedly stuck together in a Chinese finger trap. “I literally left and said, ‘I’m done. I’m not doing this movie’,” said Howery, who first met and befriended Andre years ago on the stand-up comedy circuit. “I walked straight to my hotel still in my character clothes — that’s how mad I was. It was my kids who convinced me to keep going. I told them what happened and they thought it was hilarious.”

Huh. Whelp, I can see why someone might get mad if two men were effectively docking each other in his store using a Chinese finger trap. And if you’re Eric Andre, you probably know you run the risk of seeing a knife or two as you set out to make this movie. But the reaction from Lil Rel reminds us of how much of a nightmare it must be to dive in to a prank movie with Eric Andre. The dude welcomes insanity. He probably loved it when this guy pulled out a knife as it raises the stakes. Meanwhile, Lil Rel nearly quit the entire project on sight. That’s it, I’m done, do not pass go, do not collect two million dollars.

Prank movies are a pretty tiresome, IMO, unless done extremely well. Jackass was tremendous because the cast had so many weird and hysterical characters, but also because the stunts they came up with were often pretty well-choreographed. Sacha Baron Cohen is probably the GOAT thanks to the first Borat. But after that, there is a pretty steep drop. All those YouTubers who go around asking people if they can buy guns in bad neighborhoods, or pretending they’re zombies, or simply jump-scaring people on the street with loud noises can go kick rocks. They’re anarchists and bullies wreaking havoc for the sake of views. And whenever a YouTube prankster gets clocked in the face, an angel gets its wings.

Here is a compilation of Eric Andre breaking character on his show. The grizzly bear moment is pretty telling. Clearly, he does have a line: