Group Called Extinction Rebellion Is Protesting Climate Change In NYC With Loads Of Fake Blood, Die-Ins, And The Scene Is Gory 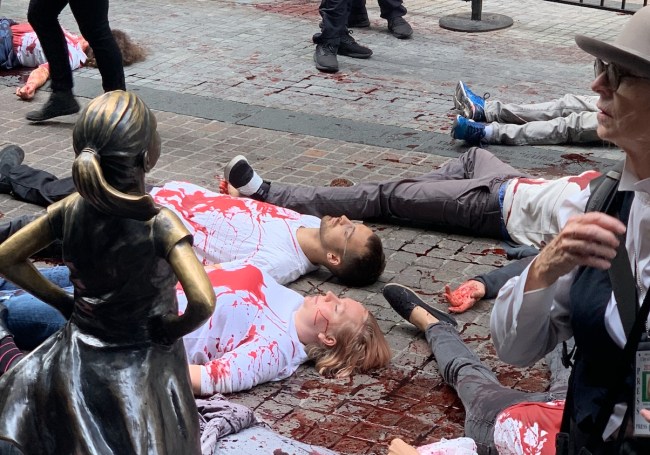 Here I was, writing about Patrick Mahomes and the Chiefs losing to the Colts on Sunday night and I hear a band playing outside. It was on the loud-side for around 9:45 AM on a Monday, even in Manhattan, so I go outside to check it out.

Living in the Financial District of New York City you see and hear a lot of stuff. You get used to it, but this particular instance was different.

There were people carrying around fake caskets with ‘our future’ written on them, a handful of people in bright red cloaks and their faces painted white, plus a couple of crosses. Then when the group got to the New York Stock Exchange building on Wall St., 20 or more people laid down right in front of the gates out front to perform ‘die-ins’ where they were then covered in fake blood.

The scene was pretty intense. With all of the people pretending to be dead, the music grew louder and the people in the group screamed. It wasn’t a scream like they were angry, it was more like a ‘i’m scared and sad’ scream.

Wall St. was covered with people lying on the ground (where I’ve seen hundreds of dogs poop on) with fake blood everywhere. 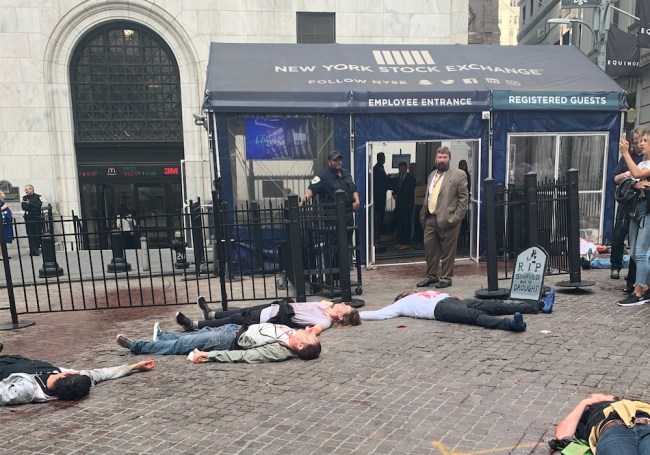 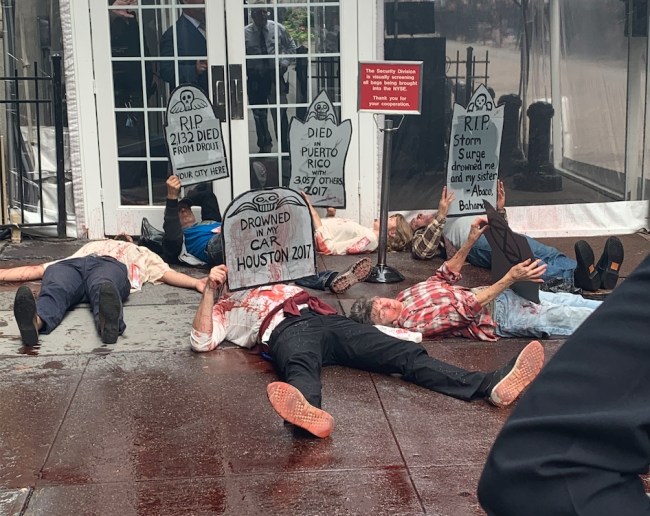 It turns out that this group is called Extinction Rebellion and Oct. 7 was the day their said rebellion against climate change begins and they’ve got a pretty intense schedule for the entire day in NYC.

Extinction Rebellion New York was born in December of 2018, we truly believe that XR is a chance for us to rise up and fight for our lives. We declared a rebellion by marching down 5th Avenue, disrupting business as usual in the busy Rockefeller Plaza by blocking the avenue, staging die ins along the plaza and on the ice (in the shape of the extinction symbol) and hanging a banner declaring climate change = mass murder. Since then we have taken action outside of City Hall, joined the youth marching for their future, and created a huge disruption in front of the New York Times.

We are promoting mass “above the ground”, or in other words- in full public view, civil disobedience. This means economic disruption- to shake the current political system- and civil disruption- to raise awareness. We are deeply sorry for any inconvenience that this causes.

Their website also states that they are “completely non-violent” and I can vouch for that, at least with my experience.

After the crowd grew sizeable at the Stock Exchange a few of the people marching bumped into me and every single time they looked at me and said excuse me, which was nice. I will say though that the fake blood was pretty violent to my shoes because it’s probably the stickiest substance I’ve ever witnessed.

The Global Extinction Rebellion will use nonviolent direct actions and peaceful civil disobedience to disrupt business-as-usual in order to compel governments to act now to save a livable climate. In New York, most arrests for such actions lead to simple court-appearance charges, and arrestees have been released from jail within four to 12 hours.

I can confirm that the folks holding up signs in the above photo were arrested as I was leaving the scene. They decided to protest in front of an apartment building and a Rolex store, also known as private property. None of them were resisting, only shouting that there is a climate crisis.

You may have noticed in the video above a giant Golden State Warriors sign. 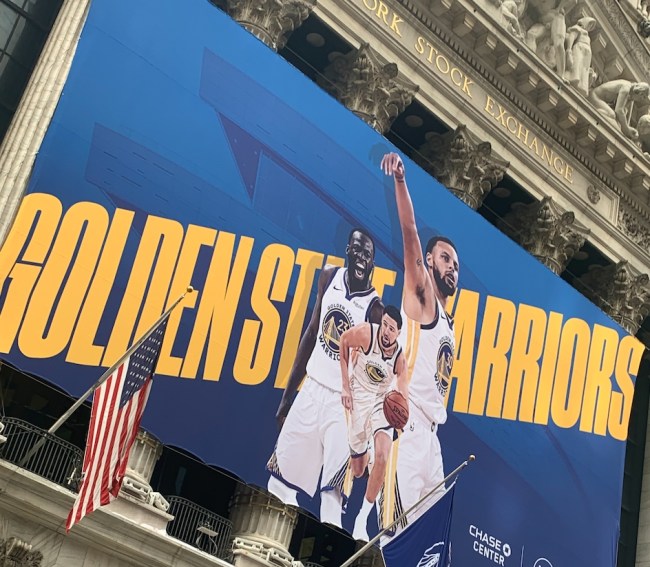 Today the NYSE welcomed executives of the team and Zaza Pachulia to celebrate the opening of the team’s new arena, Chase Center.

One of the more interesting things about the scene and New York City folks, in general, is their numbness to this kind of stuff. You could tell who the tourists were in the area because they stopped and couldn’t take their eyes off the scene, but the Wall St. employees and people needing to get somewhere couldn’t care less. Airpods were in, eyes on their phone and not even giving it a second thought.

Just another day in Manhattan, concrete jungle where dreams are made of.