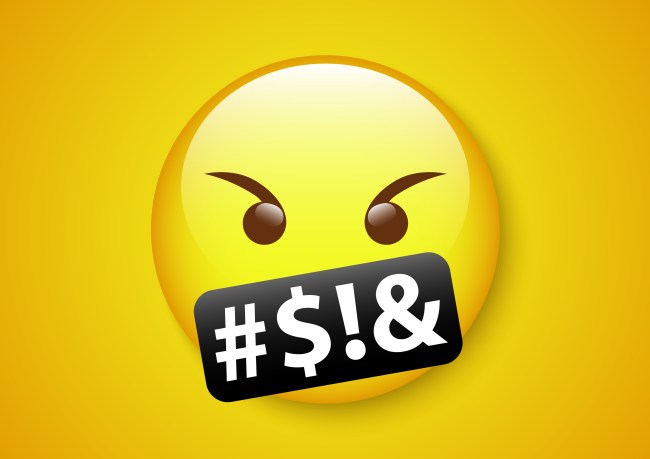 There’s nothing quite like dropping some F-bombs (or any kind of cursing)when something doesn’t go right. And, as somebody who loves the ol’ F-word, I’m more than happy to utter it anytime I so feel like it.

“Fuck this,” or “fuck that,” or “fuck, man, you’re right,” are often spewed from my mouth more often than my Sunday School teacher would like for me to admit. But could dropping F-bombs actually be a better thing than all of us actually imagine? According to a recent study, it may just be.

Thanks to the folks over at Keele University — led by a British psychologist named Richard Stevens — results found that people who used the F-word while experiencing discomfort actually increased their pain tolerance during the situation at hand. This is in contrast to those who simply voiced made-up swear words during the same situation.

To test the theory, Stevens and his team conducted an experiment where people kept their hand in ice-cold water. The findings suggested that the participants who dropped F-bombs were able to withstand more pain and keep their hands in the freezing liquid for longer.

“The simple act of swearing during the experiment enabled participants to perceive decreased pain and tolerate increased pain,” Science Alert had reported.

Further research found that people who swear often had a lesser increase in pain tolerance than those who don’t. In another test, whose findings were published in April, Stephens and a colleague had 92 participants utter made-up swear words to see if random words yielded any benefits.

While putting their hand in ice water, the testing subjects repeated one of the four words every three seconds — the F-word, a neutral word and two made-up swear words: “fouch” and “twizpipe,” according to the researchers.

Well, this is pretty fucking awesome news, don’t you think? Now you can go ahead and drop F-bombs anytime you accidentally bump your knee against your home office desk. Or when you hit your head on the bed stand. Or when you stub your toe. Basically, just go ahead and swear all you want to when you hurt yourself — and then just use research as your excuse for doing so when people give you dirty looks.

Considering the research was compared with made up words during painful scenarios, it’s no wonder Harry from the Home Alone movies kept getting his ass kicked over and over; because he wasn’t just using the F-word.

Hey, if research says it’s completely OK to drop F-bombs in time of pain, all of us should just accept the positive study results and have at it. Who says swearing’s all that bad anyway?