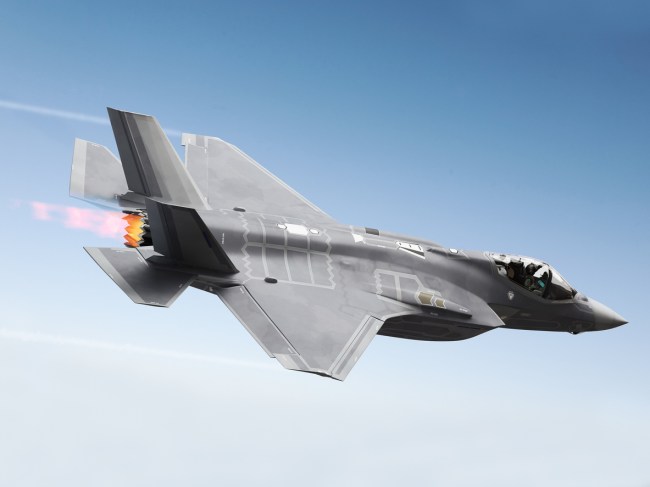 The F-35 Lightning II is widely considered one of the most, if not the most advanced fighter plane in history. All that tech and weaponry doesn’t come cheap, one F-35A fighter plane costs between $89.2 million and $115.5 million. So what better use of this technologically superior aircraft than to draw dicks in the sky.

On Tuesday, six F-35 Joint Strike Fighter pilots simulated a dogfight against one another in Arizona. During the Top Gun-esque training, the planes’ contrails formed a sky penis in the air. The U.S. Air Force says the sky dick was an “accident.”

That F-35 sky penis above Luke AFB wasn’t intended to be sky penis, base sayshttps://t.co/KrCNZbF7RH pic.twitter.com/lvknmOyrP2

RELATED: A Tip Of The Hat To This Pilot Who Wrote ‘I’m Bored’ And Drew 2 Penises In The Sky

Apparently during the exercise, one of the teams pulled back and then circled before re-engaging.

“56th Fighter Wing senior leadership reviewed the training tapes from the flight and confirmed that F-35s conducting standard fighter training maneuvers,” a spokesperson from Luke AFB said. They added that “no nefarious or inappropriate behavior” had been conducted during the training flight.”

Just got off the phone with Luke AFB officials. Two F-35s went up against two other F-35s to simulate a dogfight. And what happened? They're maneuvers created an ACCIDENTAL sky penis contrail.

Luke says it was NOT an intentional sky penis, per review

More from me (ugggggh) soon

Listen, we all have accidents; stub your toe on the bed frame, spill your drink at the bar, forget to pick up your girlfriend from the airport because you were too busy playing Fortnite. But nobody “accidentally” draws a penis in the sky.

I’m not sure drawing sky dicks is what we should be doing with stealth F-35s, especially when the F-35 program costs over $1.5 trillion over its 55-year lifespan, but I understand.

RELATED: Pilots Create A Humongous ‘Dick In A Box’ In The Sky As They Outmaneuver Marines