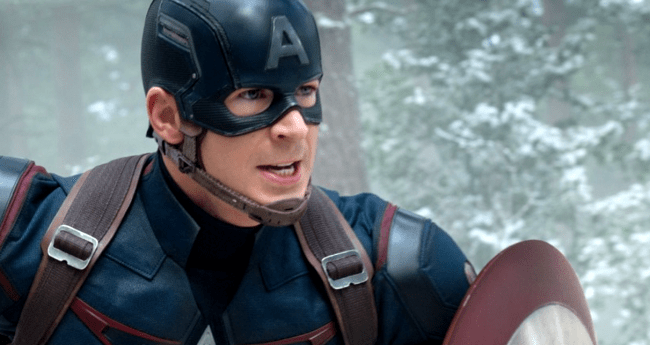 Fan theories are the best. Unfortunately, at least in my circles, there hasn’t been nearly as much to theorize about lately. The few Avengers that we’ve seen have all been on the small screen. Game of Thrones is long over. Stranger Things only just today came out with a teaser for season 4.

Those were the salad days for fan theories as all three of those shows/movies were overlapping and making our collective head spin.

Speaking of making out heads spin, here’s another fan theory that will tie your brain into a knot, and it all has to do with Captain America’s poop.

No, we’re not talking about John Walker or even Sam Wilson here, this is all about Steve Rogers’ bowel movements.

Of course this fan theory comes to us from the nerve center for fan theories, Reddit, where user MrTsquared88 has proposed that either Captain America (1) has really big poops, or (2) poops way more than the average Bucky.

Stick with him here, because it all actually makes some sort of twisted sense.

In Captain America The First Avenger, after Bucky falls off the train, Steve tells Peggy that he can’t get drunk because of the super soldier serum. She tells him that his metabolism is 4 times the amount of an average human.

That means he eats 4 times as much food, which makes sense. Similar to how Olympic athletes need to have insane diets. Cap probably does as well.

But this also means he takes either 1) incredibly massive poops that are four times the size of normal poops. Or 2) he poops four times as often as a normal person.

Meaning that during the entire battle of New York in The Avengers, Steve probably was clenching his b-hole because he would’ve had to go really bad, and wouldn’t have gotten a chance to.

Yes, Marvel fans do have way too much time on their hands these days, but his theory is still pretty spot-on. For that matter, his theory about Captain America’s poop would also apply to The Flash, Quicksilver, Wolverine, Deadpool, and pretty much any other superhero with superhealing ability.

Then again, other Redditors had theories of their own which may explain what happens with Captain America and his poop.

“Or he just absorbs every single thing from his food and he never poops,” replied Vealzy.

To this, Redditor smcarre countered, “That’s not how digestion works. Unless Cap has an incredibly powerful and efficient nuclear fusion reactor in his body able to use any food as fuel (similar to Mr Fusion from BTTF) and convert the mass directly into energy, the mass of the food he ingests has to go somewhere after he metabolizes it’s chemical energy, he is not getting fatter or gaining significant muscle mass, so the mass is definitely leaving his body somehow.”

“My guess is that he takes huge poops that he blames on The Hulk,” adds Vincitus.

“This made me realize that the avengers compound must have a Hulk-sized toilet somewhere,” wrote dadozer, taking us even on an even further tangent.

So… When does Black Widow come out again?