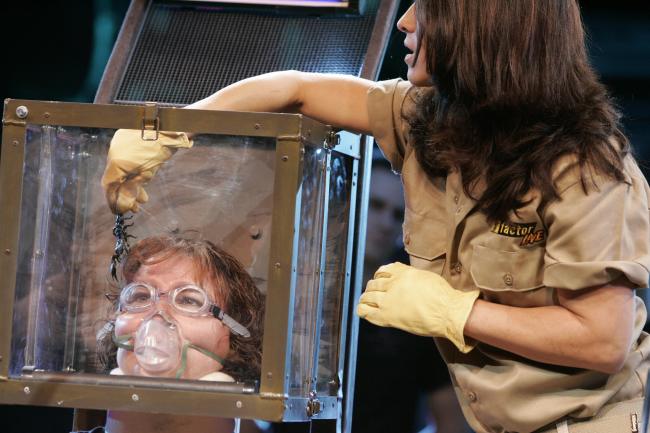 Fear Factor first debuted on June 11, 2001, and the daring stunt game show hosted by Joe Rogan pushed the limits of network television. The reality TV series, in which “contestants must decide if they have the guts and determination to face their fears while outpacing the competition,” would likely not get away nowadays with the insane stunts that it did two decades ago. The stunts were so outrageous that Fear Factor producers believed, “We’re going to hell.”

Fear Factor, which aired on NBC until 2006, pushed contestants to do more and more extreme stunts as the show progressed as the network searched for a new TV series to compete against the massively popular Survivor. Fear Factor was adapted from the original Dutch TV show named Now or Neverland.

Two producers for Fear Factor, David Hurwitz and Matt Kunitz, told Yahoo Entertainment about the craziest moments from the show. In 2001, the two producers were watching a woman drink worms out of a martini glass as one of the Fear Factor stunts.

“I think the glass had, like, three earthworms and a silkworm in it,” Hurwitz told Yahoo Entertainment. “We watched her try to drink them, and then her gag reflex kicked in. We looked at each other and went, ‘We’re going to hell.’”

The series premiere required the contestants to be dragged by a horse, and then lie down in a bed of live rats. The players who made it past those obstacles then had to navigate their way around a taxi that was suspended hundreds of feet in the air over a reservoir. Other Season 1 challenges included a snake pit, a sky-high rope crawl, a water tank and consuming a variety of gross substances from the aforementioned “Wormtinis” and “Beetle Bowls” to pig hearts and sheep’s eyes.

The producers note that the audience only remember the gross stunts, but forget about the dangerous escapades.

“It’s ironic: On an average episode, we could have people flipping a car through a moving train, and also have people eating worms — and audiences would only remember the eating worm challenge!” Kunitz said. Hurwitz added, “To this day, people only talk about Fear Factor as ‘the gross show.’ They never go, ‘That’s the show where they’re in a speeding car, it goes throw a moving train and lands on the other side!’ They only ever talk about, ‘Oh, they ate deer testicles!’”

In 2011, Fear Factor was revived, and the network wanted the show to be “bigger and better than ever.” That’s when producers attempted to do the now infamous donkey semen episode.

For a never-aired episode called “Hee Haw! Hee Haw!” the producers planned two major stunts — including that “car through a moving train” challenge — with an eating challenge in between. For that particular meal, they decided that donkey semen would be on the menu. Both Hurwitz and Kunitz stress that NBC was entirely aware of what they had planned. “Everybody approved it,” says Hurwitz. “Everything we did on the show, whether it was eating duck embryo or something else, was checked off by Endemol and NBC. So everybody knew.” Adds Kunitz, “We didn’t go rogue. Everyone signed off on every challenge, from the network to the studio.”

However, the network decided that people drinking donkey semen was hard to swallow.

“It was terrible. When we were testing it, we were like, ‘Oh my god, this has gone too far.’ We felt so bad for the crew members doing the test,” Kunitz recalled. “I remember that Joe felt so bad, he reached into his pocket and pulled out a wad of $100 bills and just gave it to the poor guys.”

After details and photos came out about the donkey semen episode, Comcast canceled the episode and NBC canceled the entire series.

Kunitz remembered NBC’s response, “Their reaction was, ‘Yeah guys, we’re not going to air that and, unfortunately, we’re also done with the show.’” The producers never saw it coming.