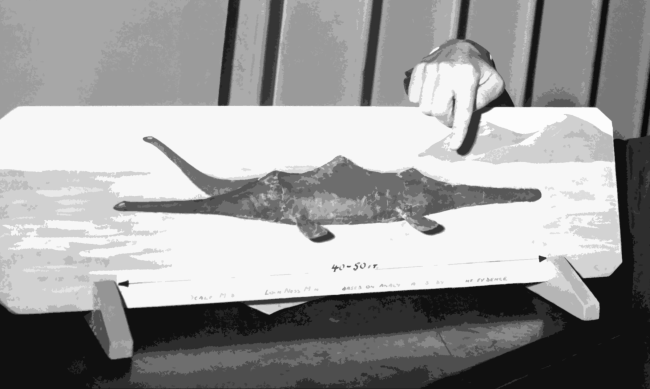 When it comes to Loch Ness Monster sightings, no one can currently top Eoin O’Faodhagain of Donegal in the Republic of Ireland.

O’Faodhagain claims to have witnessed the elusive cryptid at least 13 times since 2017, with his latest sighting being hailed as the “biggest sighting ever.”

His “biggest” sighting has been “confirmed” by the Official Loch Ness Monster Sightings Register, reports The Sun.

In the video, a long black shape can be seen floating atop the water.

The mysterious object remains suspended in the water for a few moments, before slowly submerging over the course of two minutes.

As the clip ends, the shape disappears without a trace under the tranquil waters of Loch Ness.

Related: 9th Sighting Of The Loch Ness Monster This Year Gets Documented With A Drawing

“The object came up out of the water and stayed motionless, and after a few seconds splashing motions can be seen on the video,” says O’Faodhagain.

“Then it submerged slowly into the loch disappearing from sight.

“The object in my estimation is at least 30 feet long as shown by solid blackness in the water, rising to at least 4 to 5 feet high.

“It was amazing to see such a large image caught on video compared to my previous sightings.

“This sighting is also special because there was no boat traffic or wave disturbance in the video and the surface of the loch was calm.”

There have been a total of 11 sightings officially confirmed by the Official Loch Ness Monster Sightings Register in 2021.

Below is some of the footage O’Faodhagain has captured of the legendary creature over the years.

Back in April of 1960, British cryptozoologist Tim Dinsdale, a former Royal Air Force pilot, claimed he saw the creature and said he shot 15 feet of film at a distance of about one mile showing the monster swimming and diving, according to the caption on a photo (shown above with Dinsdale and a model he made of the creature).

Later, the film was shown on the BBC Panorama TV program and he was commissioned to write a book, Loch Ness Monster, which was published in 1961.

Dinsdale said he believed the monster could be a type of large reptile, possibly an evolved form of Pleiosaur, an aquatic dinosaur that existed more than 60 million years ago.

In January of this year, Henry Bauer, a former professor at Virginia Polytechnic Institute and State University, claimed to have solved the monster mystery.

He believes what people have been witnessing over the years is merely a type of undiscovered turtle that somehow got trapped in the Loch many years ago.

Whether O’Faodhagain or Dinsale or Bauer are correct in their claims, as it has since the first sighting of the monster in the year 565, remains to be seen.