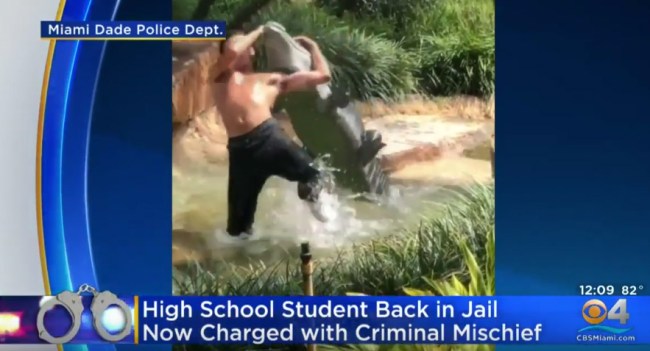 It was just four days ago that we brought you the story of 18-year-old Florida high school student Gianny Sosa-Hernandez and his failed attempt to RKO his principal.

Last week it was reported that Sosa-Hernandez, a student at Southridge High School in Miami, attempted to RKO his principal out of nowhere, but instead wound up in a headlock (video here) and was charged with battery on a school official and interference with an educational institution.

He ended up spending two nights in jail and said about the incident, “What I did, it wasn’t intentional. I wasn’t trying to hurt nobody.”

On Monday, Sosa-Hernandez was back in the news and once again it has to do to with his unabiding love of WWE Superstar Randall K. Orton’s finishing move the RKO.

This time, rather than try an RKO out of nowhere on a human being (he learned his lesson there apparently), Sosa-Hernandez took off his shirt, jumped over a barrier at The Falls shopping mall, grabbed a fake alligator that was on display, threw it into some water, wrestled the gator a little bit, delivered a devastating RKO on the prop, then pinned it for the 1-2-3 and the big W.

He was even nice enough to post video of the “match” on his Instagram account, which may or may not have had to do with him being arrested again.

Sosa-Hernandez now faces charges of vandalizing property, including the fake alligator, which is reportedly valued at $3,690.

Totally worth it though.