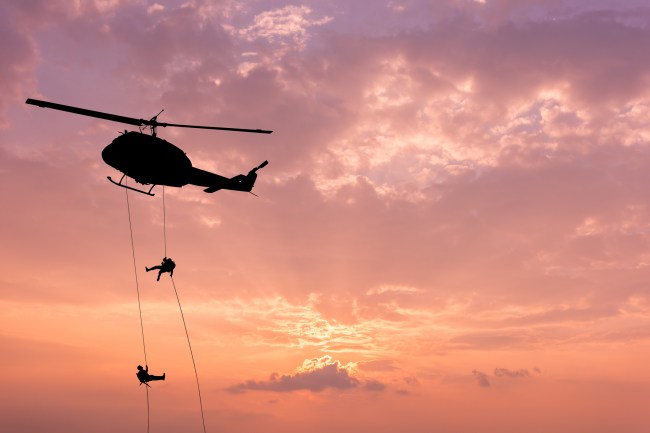 Some gangsters in France pulled off one of the most spectacular jailbreaks in history over the weekend. Three heavily armed assailants landed a helicopter inside of a jail to break out France’s ‘most notorious gangster’, Redoine Faid, according to various media outlets, and the entire ordeal sounds like something that you’d expect to see in a Hollywood movie.

Honestly, reading through the details of this jailbreak it sounds like something you’d expect to see in an Oceans 14 film and the idea that this happened in real life is nothing short of insanity. I don’t mean to glorify this act of criminality by comparing it to a Hollywood film, but it’s so outrageous that the Oceans films are the only comparison I have (via the Telegraph UK):

Redoine Faid was being visited by his brother in Réau prison in the Paris region when the men burst into the room on Sunday morning and extracted him.
A third man waited in the helicopter in the prison courtyard to watch over the pilot, a flying instructor whose aircraft the men hijacked in a nearby airfield and whom they forced to take part in the dramatic operation.
….
….
Faid, who has said he was inspired by US films such as “Scarface” and “Heat”, was serving 25 years in Réau prison for his part in a botched 2010 cash-transport van robbery that he masterminded.
The helicopter that extracted him on Sunday flew right across the Paris region from the jail southeast of the capital, before being dumped not far from Charles de Gaulle airport to the northeast of the city.
The aircraft was then set alight but was only partly damaged and the fire was extinguished when police found it a short time later. Media reports said the pilot had been released and was not injured.
The prison courtyard it landed in was the only one not fitted with anti-helicopter nets as it is used by inmates only when they are being admitted or released from the jail. (via)

Redoine Faid has been the ‘most wanted criminal’ in France since 2013 (when he wasn’t locked up). And this is the second time he’s escaped jail. The first time was back in April 2013 when he was on the run for a month.

Imagine having so much money from your criminal empire that you can pay highly-trained armed assailants to hijack a helicopter and land it in a jail, in the only part of the jail that isn’t outfitted with anti-helicopter protections, and then those people break you out of prison. When I think of non-white collar crimes, I think about the person making a few thousand dollars here or there. Not making enough money to pull off a stunt that would leave Danny Ocean stunned.

You can read the full story HERE on The Guardian.