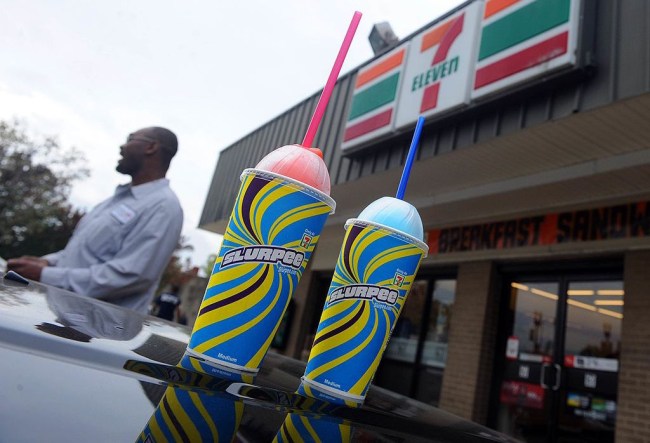 Murder hornets. Global pandemic. Speculation about World War 3. 2020 has already been a major downer of a year and it seems like we wake up every single day telling ourselves there’s no way it can get worse before it throws us yet another curveball.

There’s nothing people—especially those who don’t understand the concept of time-cost—love more than free shit and the masses will go to great lengths to get their hands on something that doesn’t require money to change hands.

Every time July 11 rolls around, people flock to their closest 7-Eleven to take advantage of the chain’s Free Slurpee Day—which has been celebrated every 7/11 (get it?) since 2002—where some of them will employ empty buckets of KFC or plastic pumpkins used to haul candy on Halloween to test the limits of what “free” means while potentially ruining things for everyone else.

Sadly, they won’t be able to do that this year, as Delish reports 7-Eleven has called off Free Slurpee Day to discourage people from gathering in stores and potentially spreading or contracting a disease in pursuit of a free drink that probably costs five cents at the very most.

The chain did announce it will be donating one million meals to Feeding America to make amends, which is a classy move from the world’s classiest convenience store chain, Additionally, those among us who are members of the elite 7Rewards loyalty program will be receiving a coupon for one free Slurpee on July 1 that’s valid for the entire month.

It appears all is not lost, my friends, and there is a valuable lesson to be learned from 7-Eleven here: when life gives you lemons, make Slurpees (or at least give people coupons that can be redeemed for one).