Is This Theory About The Crypts In ‘Game Of Thrones’ Too Obvious To Actually Pan Out? 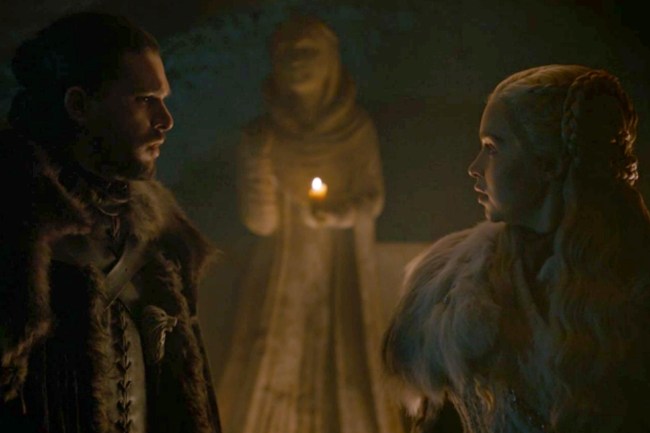 There are only four episodes remaining in the final season of Game of Thrones, and if you were hoping the show would come hot out of the gate, you’re probably slightly disappointed with how things have played out over the first couple of episodes.

That’s not to say this season hasn’t been a good one so far; it’s just that the majority of the time has been devoted to setting things up as we prepare for what will be an undoubtedly batshit ending.

After the premiere got us reacquainted with everyone a couple of weeks ago, the action moved to Winterfell last Sunday for the closest thing Game of Thrones will ever have to a bottle episode as everyone who isn’t chilling within the relatively safe confines of King’s Landing geared up for their impending war with the dead.

An episode of Game of Thrones isn’t truly an episode of Game of Thrones unless it spawns some fan theories and this week’s installment brought the goods. There’s been plenty of speculation about the meaning of the song Podrick busted out while chugging wine around the fire while waiting for the Night King to arrive—although some people are under the impression the iced-out baddie has something else in mind.

I normally rely on obsessive fans on the internet to open my eyes to key details I may have missed but there was one example of foreshadowing on the latest episode that even the most casual fan probably picked up on concerning Winterfell’s oft-mentioned crypts.

When the horn sounded to announce the arrival of the army of the dead, anyone who was incapable of fighting them off was ushered into the supposed safety of the maze under the castle.

However, as our resident Game of Thrones reviewer pointed out earlier this week, it might not have been the brightest idea to shepherd the defenseless masses into a lair populated by dead people when you consider you’re fighting someone who specializes in resurrections.

If you’re looking for more proof to support the theory that the dead in the crypts will rise, some people think they’ve found it in the teaser for the third episode that features Daenerys telling Jon Snow “The dead are already here.”

It’s certainly a convincing argument but there’s one question I can’t help but ask: is it too obvious to actually pan out?

While many of the theories I’ve come across in the past rely on an encyclopedic knowledge of the books and the ability to analyze the meaning of seemingly mundane shit like the jewelry someone is rocking, we’ve kind of been hit over the head with the fact that the crypts aren’t safe.

Polygon did a good job exploring the theory and pointed out some of the possible flaws concerning the expiration date of decomposing corpses and the proximity required to raise them. They outlet seems to agree some shit is going to go down in the crypts, but as they note, there are plenty of other ways for things to go wrong.

I guess we’ll find out on Sunday.