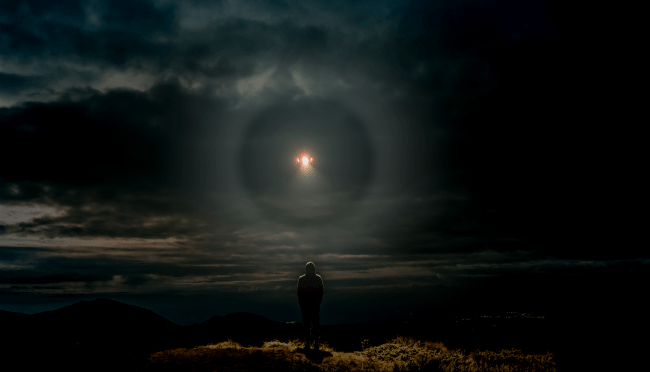 Things seem to have slowed down a bit on the UFO front of late. Perhaps it is because the aliens have all the data they need after unleashing a pandemic upon the planet to gauge our reactions. (I am guessing that we didn’t score very well.)

That doesn’t mean that “something” isn’t always still out there though, as a recent UFO sighting filmed in Kent, England certainly proves.

In video footage posted to Twitter by area resident Steve Sangster of Orpington, Greater London, a round, glowing red object appears in the night, leaving a fiery trail as it zoomed through the sky.

Kent Live reports, “Some people who have seen the video claim it must be aliens, while other suggestions range from a plane on fire to a sophisticated firework.”

The footage of the glowing UFO, posted on Twitter by Sangster this past Saturday night at 8:54 p.m., shows what at first glance appears to be nothing more than some sort of firework being set off in the sky.

However, instead of dissipating as a firework would, the glowing orb only intensified in brightness.

“I had the telescope out because there was a beautiful moon and I was waiting for it come come up,” Sangster explained.

“I could see out of the corner of my eye a sparkling object, which I initially thought was a shooting star.

“I shared it on Twitter to see if anyone had any good ideas as to what it could be.”

One of his followers suggested that the glowing UFO may have been something like one of the Team AeroSparx Motorglider Aerobatics planes in flight.

Unfortunately, after doing some investigation, Kent Live reports that Sangster was unable to find any events in the area that would have matched up with what he saw.

“There has been a great deal of interest and a lot of people think it could be aliens visiting,” he said.

“There was also a person who has written an extraterrestrial book and he’s keen to examine the video in more detail.

“I looked at local events in the area, which also included Brands Hatch, but I couldn’t see anything due to take place that evening.”

Maybe an airplane that dumped kerosene and because of the sun's rays there was such a phenomenon, sometimes clouds shine that way when they are illuminated by the sun in the evening. 😄

After not finding anything concrete to explain what he saw in the sky, other than it being an alien UFO, Sangster said, “It must have been some sort of plane, whether it was in difficulties or whether it was just practicing,” he added.

“It’s just bizarre that no one has got any idea or has come forward with any credible explanation.”

Maybe. Maybe not. Or, maybe that’s just what those pulling our strings want us to think.