Remember That Creepy Glowing Orb Trump Touched That Got The Attention Of The Church Of Satan? We’ve Got It Now 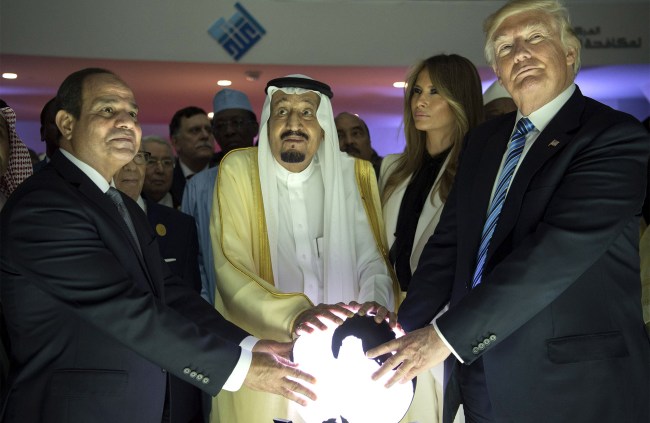 Back in 2017, President Donald Trump went viral after posing for a photo with him, King Salman of Saudi Arabia and Egyptian President Abdel Fattah el-Sisi all touching an ominous-looking glowing orb.

According to The Guardian, and this is their words, “when the presidents of America and Egypt and the Saudi monarch caressed the pulsing sphere, it ‘officially activated’ the Saudis’ new Global Centre for Combating Extremist Ideology.”

Trump and the other two leaders “caressing a pulsing sphere” sounds like the synopsis of an adult film, but, surely that wasn’t what The Guardian was aiming for, right?

Amazingly, Trump touching (not caressing) the orb back then was even predicted a week before it happened, rightfully freaking the fuck out of the guy who made the prediction.

how tf did this end up becoming relevant to actual events

Everyone who saw his tweet was also rightfully freaked the fuck out.

Following you just in case you foretell anything else important…

Even the Church of Satan got in on the bizarre turn of events.

You know it's bad when Church of Satan distances itself.🤔

Welp, fast forward to 2020 and that creepy, mysterious glowing orb Trump and company touched while in Saudia Arabia is now in the possession of the United States. F yeah, America! USA! USA!

According to a new book, MBS: The Rise to Power of Mohammed bin Salman, by the New York Times correspondent Ben Hubbard…

Hubbard reveals that after Trump went home, “an unusual accessory showed up in a hallway at the US embassy in Riyadh: one orb, slightly used”.

The Saudis, he writes, had noticed US visitors to their Centre gleefully taking pictures with the orb, so they decided to give it to their American guests.

Alas, the orb’s fate matched that of many who come into contact with Trump: after shining brightly for a brief but brilliant moment, it was consigned to the chilliest outer darkness.

“It sat in a hallway for a number of days, where diplomats passing by would pose for photos,” Hubbard writes. But then “someone apparently worried that the photos would make their way online and cause a scandal, so the orb was hidden away in embassy storage”.

No wonder Elizabeth Warren and Mike Bloomberg have decided to call it quits on their Presidential aspirations in 2020.

Trump is now unbeatable in 2020. He has secured the orb of power. https://t.co/jMhngzmQ0M

@marwilliamson The source of Pres. Trump's "dark, psychic energy" is confirmed: The Orb of Covfefe! 😱 https://t.co/dT7fyBrt3z

this will look great in the Trump Presidental Casino lobby.