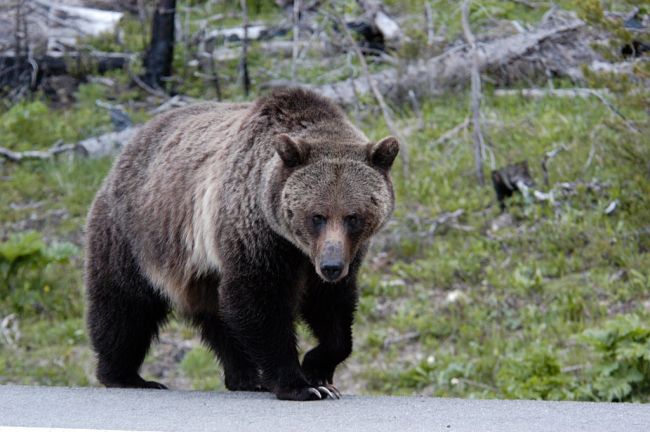 Yellowstone National Park is as close as it gets to Earth before humans. The flora and fauna is abundant and the land is virtually untouched. It is one of the wildest places within the United States, if not on the planet, and makes for some insane stories, photos and videos. Take this past weekend for example.

Early on the Friday before Memorial Day, a 39-year-old man was hiking alone near Mammoth Hot Springs in Yellowstone National Park. He was about 1.5 miles from the trailhead when he stumbled up on two grizzly bears. One of which charged. The man was able to hike out like a badass, but he suffered “significant injuries” to his lower extremities. Yellowstone’s National Park Service released a statement with the details.

Friday’s incident marked the first bear attack at Yellowstone since June 22, 2020, but it was not the only encounter that day. Hours later, a bear charged out of nowhere on a road south of Roaring Mountain and north of the Norris Geyser Basin.

In the video, a ranger can be seen trying to keep a bear at distance, while also trying to keep traffic away from the road. Moments later, the big grizzly bear charges. The ranger is able to take cover behind his truck and grabs his rifle, firing multiple rubber rounds to fend off the bear. The grizzly runs back into the woods and the ranger fires loud blanks to scare it off.

Fortunately, nobody was hurt. Either way, for a moment there, the ranger appears to be in grave danger. Absolutely terrifying.

The story behind the charge.

Photographer Deby Dixon provided the backstory for the situation. The bear deserves better and the ranger should have never been put in that position. Apparently, the charging bear was chasing some tail. His girl crossed the road, but people in their cars pulled between them to take pictures. Those dumb folks separated the two bears, which resulted in some pent-up anger. When the ranger stepped in to try and deescalate the scene, the bear saw him as a threat.

Once again, stupid people seeking clout were at fault.

Use your head, people.

This incident was not the only idiotic bear situation to unfold in Yellowstone this year. Earlier in May, some random lady got FAR TOO CLOSE to a group of three grizzlies and tried to take a picture. One of the bears charged. It ended up being a bluff, but the video (the people behind the camera did not know the lady) caught a near-gruesome scene unfold.

It just goes to show… maybe don’t approach a WILD GRIZZLY BEAR at all, and definitely don’t try to get up close for a picture…