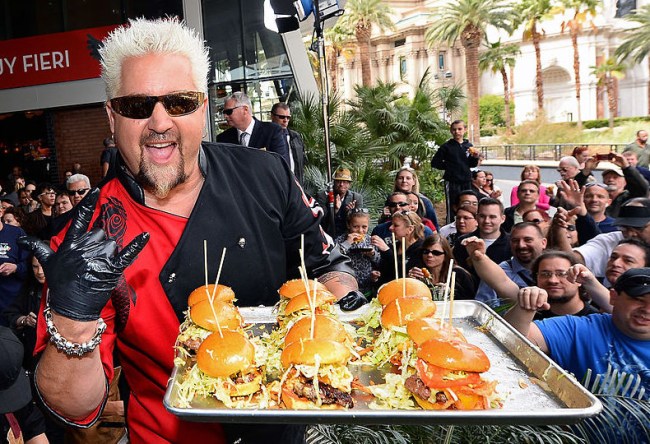 In 2006, the mayor of Flavortown officially took office after Guy Fieri won the second season of The Next Food Network Star and officially ushered in a new culinary era defined by frosted tips, flame-covered bowling shirts, and an intense hatred for any dish featuring an egg.

Since then, Fieri—whose last name remains an enigma—has become a sensation who has inspired bar crawls and Smash Mouth-inspired conspiracy theories in his honor, and while he has his fair share of haters (like the guy who wrote the infamous New York Times review of his now-shuttered restaurant), there’s no denying he’s a super good dude based on all of the evidence at hand.

Fieri might have gotten where he is today thanks to his skills in the kitchen, but more than a decade later, he’s known less for his culinary prowess and more for the personality that’s helped him turn into a bonafide meme and it appears he’s decided to fully embrace his role as an internet phenomenon.

During the most recent celebration of the day that America’s founding fathers decided they were officially tired of Britain’s bullshit, I was scrolling through Twitter and was met by Fieri’s celebratory post commemorating Independence Day.

The post would serve as my portal to a rabbit hole of Guy Fieri’s tweets, and after a thorough investigation, I think it’s safe to say he might have the best Twitter account on the planet based on what he’s recently thrown up.

Need proof? Here are some of the highlights—like the time Fieri did everything in his power to get on the “Old Town Road” remix I didn’t know I needed in my life.

Is it too late for a Flavor Town Road Remix @LilNasX? pic.twitter.com/0L2jZHbttV

it’s never too late for u legend https://t.co/oqTlRvf9zt

Maybe we should drop Panini before we take a trip to Flavortown @LilNasX? https://t.co/Lu2nMS8Rmt pic.twitter.com/85fXX51aWx

If you’re looking for more evidence that Fieri is a Twitter master, look no further than these.

They’ll have to lock me up for this one! Guilty as charged ⛓🗝 #Repost @WineandCrimePod pic.twitter.com/Wa5V2upFgT

Catch me in the @ToyStory 4 deleted scenes! Buzz said I was a pleasure to work with, but I guess the editors didn't agree. pic.twitter.com/WfDki5bOe0

So the internet tells me that today is both #NationalSunglassesDay 😎 AND #NationalHandshakeDay 🤝 Who makes this stuff up anyways?!? pic.twitter.com/XIhuc6DIvC

We got no troubles 🦞
Life is the bubbles 🐡
Under the sea 🐠 https://t.co/SlepakSULp

In the culinary justice system, taste-based offenses are considered especially heinous. In Flavortown, the one dedicated detective who investigates bland food is the leader of an elite squad known as the Sketchy Chef Unit. These are Guy's stories. #DUNDUN #TheLawsofFlavortown pic.twitter.com/alK2QmsQu7

We are truly not worthy.