History Of Things: The Origin And Evolution Of Popcorn Goes Back Thousands Of Years 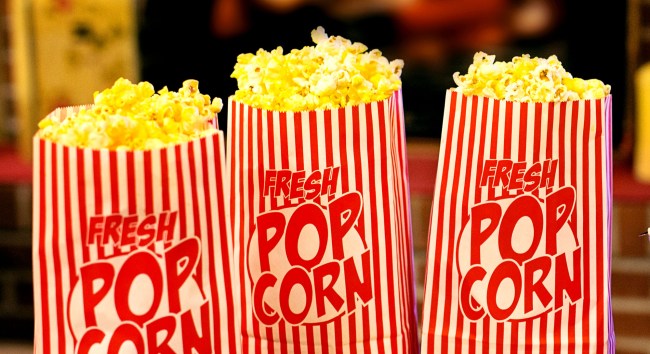 Popcorn is the defending champ year after year at the movies, so it should come as no surprise that people have been popping that corn from the time that they started planting corn, which was only 10,000 years or so ago. But what is the history and origin of popcorn? How did popcorn become, well, popcorn?

We know that people didn’t take long after those first corn crops 10,000 years ago to start figuring out how to pop it thanks to archeological discoveries that show that people were making popcorn in what is now Mexico. Once they figured out that by heating the kernels, they could make corn pop, popcorn became a part of the way way way early North American diet. Just imagine our earliest people watching whatever Aztec gladiator games they held and eating popcorn like you do in the movie theaters of today. That almost certainly happened.

It is kind of wild to know that popcorn has been a favorite snack through thousands of years and cultures rising and falling all around it. When civilizations came crashing down, the chill bros just sat back and ate their popcorn until someone came up with a new take on culture. You can bet that when Rome was burning, some of the dudes who got out early were perched atop one of the seven hills of Rome munching away.

But let’s narrow it down a little and find out just where and when popcorn as we know it became a big deal in our culture. Through the early days of Colonial living, people popped corn by hand on stove tops, probably not that much different than we do today, and back then that had to be a real big deal. I mean, they didn’t have internet. No cable TV. Forget Wi-Fi. These people had no entertainment that they didn’t make themselves, and in this environment, you can only imagine how amazing popcorn seemed to them. Like, that was probably the main event of the evening. After some charades maybe around the fire.

Eventually, people had to come up with a name for it, right? I mean, we can assume they probably had different names for it way back in the day, or maybe it was so simple as seeing the corn get popped and everyone just went with “popcorn” or maybe they had brawls between the “popcorn” people and the “corn pop” folks. Who knows? Again, these people did not have the internet or cable TV.

Well, “popped corn” first shows up in Dictionary of Americanisms, published in 1848 by a bro named John Russell Bartlett. So, we know at the very least that people were calling it something similar to “popcorn” before the Civil War. It was apparently a popular treat up and down the east coast, north and south. Everyone loved it.

But popcorn was still just a home snack kind of thing until 1885 when Charles Cretors invented the first large scale popcorn machine. He then fine-tuned this new popcorn maker and rigged up street carts to make popcorn on the fly all over Chicago. This is really where the idea of popcorn being something more than an in-home treat was born.

And it was a good thing that Cretors got things going because it wasn’t long before America stumbled into the Great Depression. Because popcorn was relatively inexpensive at only five or ten cents a bag, it became a huge hit with the struggling American people. Farmers began getting extra income from making popcorn, including one farmer named Orville Redenbacher, who as I’m sure you all know became the popcorn kingpin, swinging that pimp cane around at anyone who tried to get up in his popcorn palaces.

While Orville Redenbacher was furiously winning the popcorn game, World War II broke out, which meant that most goods and treats were rationed. Not popcorn though, which exploded as Americans began popping it three times more than before the war. So, there was Orville Redenbacher becoming the Pablo Escobar of popcorn while business boomed and everyone ate popcorn to support the troops. You know they did.

And while all this was going on, a dude named Glen W. Dickinson started installing popcorn makers in the lobbies of the movie theaters he owned. You can easily put together the picture of how that move made popcorn the staple of the movie theater experience, soon becoming more profitable than the films being shown. This led our man Dickinson to start converting whole farms to the production of popcorn so that his theaters could be popping off like they still do to this day.

That was popcorn’s golden moment, but it didn’t end there. In 1981, General Mills came up with microwave popcorn, which just made popcorn more popular than ever. Imagine how those early Americans would feel if they could see how much popcorn has become a part of everyday life in our country. There is no America without popcorn. It just doesn’t work. You and I both know that at the end of the day, popcorn is the only thing keeping us from eating our own fingers and stabbing each other with the bones. Maybe I have gone too far, but the point remains that popcorn is everywhere now. There are even six different cities in this crazy country that claim to be the “Popcorn Capital of the World.”

From 10,000 years ago, when people were just experimenting with their corn, to today when towns are fighting over who gets to be the popcorn capital, people have been in love with popcorn. It has seen them through Aztec throwdowns and Civil Wars. People have been eating popcorn at the movies almost from the time movies were a thing. Through it all, popcorn has been there.

We might have called it something different prior to John Russell Bartlett printing the word “popcorn” in his dictionary, but it has always been around, and something tells me that popcorn will be the last thing that goes before this whole planet goes under like a shady bankrupt businessman. And as it happens, you can bet there will be some people just hanging out, munching on some popcorn watching it all go down.