Homeless Veteran Involved In $400,000 GoFundMe Scam Has Been Sentenced 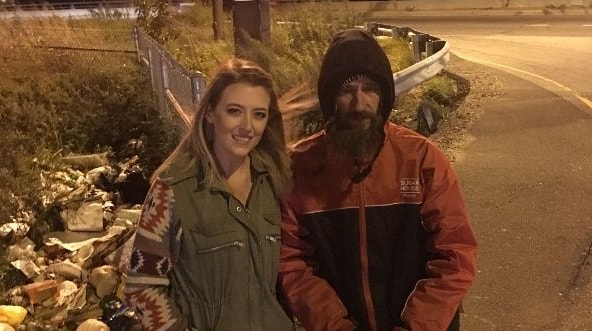 The homeless man who participated in stealing GoFundMe donations of more than $400,000 has been sentenced. Johnny Bobbitt Jr. is the homeless military veteran who helped bilk thousands of Good Samaritans out of their money by tricking the public with a heartwarming story that turned out to be a lie.

In what was one of the worst betrayals of goodwill in recent memory, Kate McClure and her boyfriend Mark D’Amico told the heart-melting story of how a homeless man gave his last $20 after Kate was stranded after her car ran out of gas in New Jersey. The feel-good story quickly went viral in November of 2017 and soon a GoFundMe account was created. Within weeks, over 14,000 people donated nearly $403,000 to help Bobbit to get out of his homeless existence.

While Bobbit was homeless, the entire story of him giving his last dollars for gas money was a farce. Soon the couple and the homeless man began to squabble over the newfound fortune. McClure and D’Amico would allege that Bobbit was spending the money on drugs and that they needed to take over the finances. Soon after it came out that the couple were using the donation money to buy a BMW, designer bags, and luxurious vacation trips. Over $85,000 in cash was withdrawn at or near casinos in Atlantic City, Pennsylvania and Las Vegas.

RELATED: Homeless Veteran And NJ Couple Allegedly Cooked Up Sob Story To Scam People Out Of $400,000, Charges Being Filed

However, their story fell apart last August when Bobbit filed a lawsuit against McClure and D’Amico for withholding funds from the GoFundMe campaign. The lawsuit accused the couple of using the GoFundMe account “as their personal piggy bank to fund a lifestyle that they could not otherwise afford.” The Burlington County prosecutors in N.J. investigated all three parties last year and found evidence that the entire viral story was a scheme to enrich the three co-conspirators.

This week, Johnny Bobbitt Jr. pleaded guilty to the charge of conspiracy to commit theft by deception. On Friday in a state court, Bobbit was sentenced to five years’ probation for his role in the motorist in distress scam that stole $402,706. Bobbit must also attend inpatient drug treatment and cooperate with prosecutors against McClure and D’Amico. If he violates those conditions, he will be sentenced to five years in prison with no possibility of parole for at least 18 months. Last month, Bobbitt pleaded guilty to a federal money laundering conspiracy charge.

“Mr. Bobbitt was an instrumental part of the fraudulent campaign; indeed he was the face of it,” Burlington County Prosecutor Scott Coffina said in a statement. “He admittedly promoted and perpetuated the false narrative that he had given his last $20 to his co-conspirator Kate McClure when she had run out of gas on the side of the highway, with the intent to manipulate the goodwill of others to obtain money for himself.” Coffina said that “there is no denying that Johnny Bobbitt has struggled with addiction, and that his addiction was a factor in his criminal conduct.”