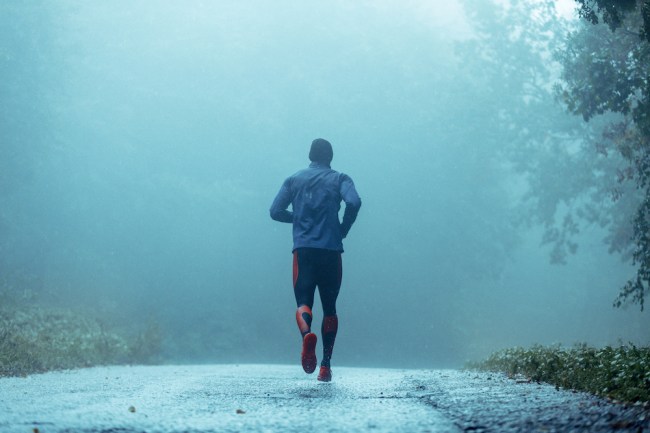 Sometimes you just need to get outside and workout.

Unfortunately, Mother Nature isn’t being cooperative and the rain is coming down at a steady pace.

Stay inside? Hit the treadmill? How about you grow a set and go for a nice little run in the rain.

If you do though, do it correctly so you don’t injury yourself or fall flat on your face on a busy street.

GQ has some suggestions for running in the crap weather this summer.

He suggests staying hydrated – because even though you’re running in water, it doesn’t mean you’re drinking it – stripping off all your wet gear immediately and the proper way to run because people tend to run differently in wet conditions.

“In wet conditions, it’s natural to see a change in your mechanics, even if you’re not aware of it,” explains Metcalf. “A lot of people will almost shuffle their feet when it’s raining like they’re prepping themselves not to fall It’s not your mechanics that should be changing in most cases, though, just your general awareness”

The biggest takeaway though is the common misconception of putting on several layers. That’s actually a bad idea.

“A lot of people think you need to layer up more when it’s raining out,” Metcalf says, “but that’s not the case. You actually want to wear fewer clothes than you’d think.”

Especially if those clothes happen to be cotton, which will act like a sponge and weigh you down in the rain, no matter how many layers you put on. Opt instead for lighter, moisture-wicking fabrics from the hat on your head—which should have a brim to keep water out of your eyes—to the shoes and socks on your toes.

My personal suggestions for running in the rain include:

So next time the heavens open up before your run, just go for it. A little water never hurt anyone. Unless you’re counting drowning victims.