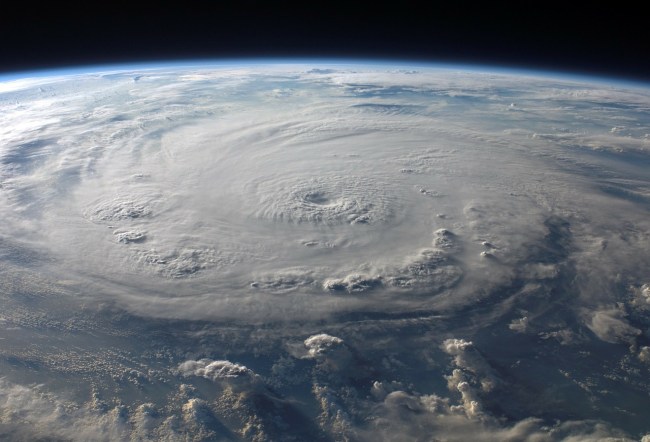 Hurricane season is officially in full swing and there are currently a number of storms in line waiting for their chance to make life miserable for anyone who’s unfortunate enough to be in their path.

TROPICAL UPDATE: Not one, not two, but THREE hurricanes all sharing the Atlantic right now at the peak of the season. You're going to hear a lot more about #Florence this week as it will be making landfall in the Carolinas as a major hurricane Thursday. pic.twitter.com/Mzs9y8HuvI

Hurricane Florence will be the first of them to step to the plate as it continues to hurtle toward the East Coast of the United States.

Florence still has a while to go before it makes landfall, but if the meteorologists keeping tabs on her are to be believed, the people in its path could be in for a very bad time.

Pictures of Florence taken from space have started to make the rounds around the internet this morning and it’s very clear the storm is not messing around.

The NOAA also released a GIF of Florence forming, which is equally cool and incredibly terrifying.

This incredible loop from #GOESEast shows Hurricane #Florence churning in the Atlantic. The storm is strengthening rapidly and is expected to become a major hurricane very soon. Latest: https://t.co/LdMJC4oIds pic.twitter.com/AqMr0P2Ogm

The administration has also been sending planes filled with some of the bravest people alive to fly through the storm to track its progress and the videos are pretty wild.

NOAA's WP-3D Orion (#NOAA42) and Gulfstream-IV (#NOAA49) are flying missions today to survey Hurricane #Florence. Check out this video from yesterday's P-3 flight into #Florence. Stay up to date on all hurricane activity at https://t.co/MlZk25kG0d. Video: Nick Underwood/NOAA pic.twitter.com/MZXhiJWvVh

As it stands, Hurricane Florence is a Category 4 storm and is projected to land in the vicinity of North and South Carolina at some point on Thursday.

One meteorologist posted an image of what it could look like when Florence arrives and you might need a new pair of underwear after looking at it if you happen to be in the projected path.

OK you guys, my intention is not to scare anyone with this message.

This is what it will look like, according to the latest high-res model prediction: pic.twitter.com/B8vCm3FDi6

According to CNN, the hurricane currently has sustained winds of 130 MPH.

There’s no way to perfectly predict what that number will look like as Florence gets closer to shore but they say there’s a chance it could be the most severe storm to hit the region in the last 30 years:

Further strengthening is expected, as Florence moves toward North and South Carolina, where it could unleash its fury as the most powerful storm to hit the region in three decades.

We’ll be keeping a close eye on the hurricane (as well as the ones waiting in line) but if you’re in the Carolinas you might want to start stocking up on beer, Little Debbies, and other essentials.