With technology advancing and becoming a major part of our lives, there are more and more ways for people to get caught cheating. Spicy text messages, a digital trail of infidelity on email, your girlfriend’s friend seeing your profile on Tinder, an Instagram model tattling on you when you after you unsuccessfully attempt to slide into her DMs. But one woman got busted because her husband caught her cheating on Google Street View. Ain’t that some shit.

We take you to Lima, Peru where one trifling-ass wife got caught red-handed with her sideman. The anonymous man was looking for the best way to get to a popular bridge. The man used Google Street View to find his way around the area when he found way more than he could have ever bargained for. He saw an image of his wife cuddling up with a man on a bench with his head on her lap while she was stroking his hair. Ouch. 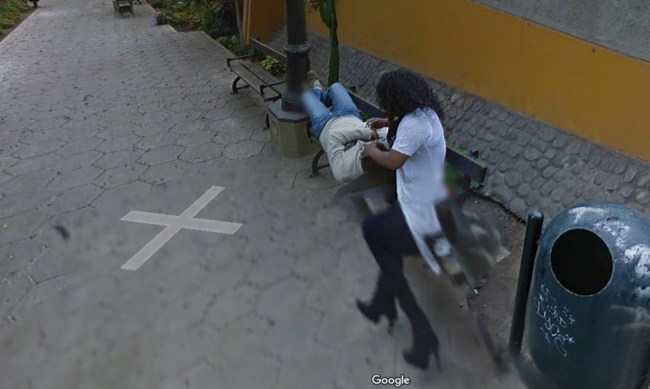 Coincidentally, the bridge in the Peruvian capital that the man was investigating is called the “Puente de los Suspiros,” which ironically translates to “Bridge of Sighs.” Instead of directions on the bridge, Google Cheat View gave him directions to the divorce lawyer.

The photo, which was taken in 2013, was enough evidence of infidelity that the man filed for divorce. The cheating wife admitted to having an affair. Be careful, big brother is watching you cheat.

Cheating isn’t the only thing caught on Google Street View, crimes including prostitution and illegal logging have been caught by Google Maps and Google Earth.