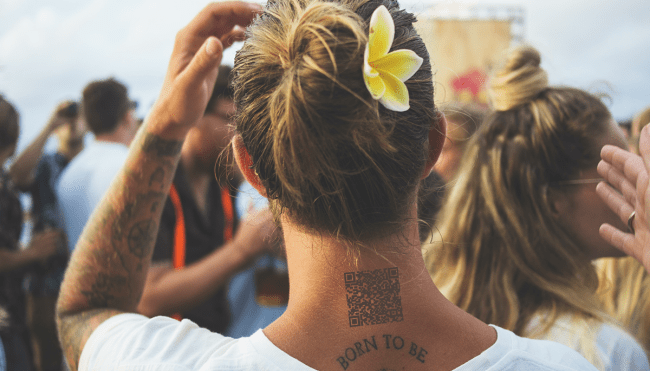 A couple of years ago, Ariana Grande showed off a new tattoo she’d gotten to promote a new song only to discover the Japanese characters she had permanently inked on her body were actually an accidental tribute to a charcoal grill that is commonly used to cook food in the country.

IT WAS SO FUNNY WHEN ARIANA GRANDE GOT A TATTOO THAT SAID "SHICHIRIN" pic.twitter.com/PNPeIc8pvl

In doing so, Grande joined a long line of people who failed to do their due diligence before committing to a tattoo, including another singer who failed to run her lyrics through spell check before going under the gun. Now, we can add another member to their ranks courtesy of an influencer in Colombia who learned about the potential pitfalls of getting a QR code embedded in your epidermis.

According to News18, Mauricio Gomez—who also goes “La Liendra” on an Instagram account that’s managed to rack up over 5.4 million followers—decided to make it easier for people he encountered to visit his page by throwing a tattoo of a QR code on his neck that was capable of redirecting potential followers to his profile on the platform by scanning it with their phone.

It would appear the tattoo functioned as intended at some point in time based on the video he posted back in February, but earlier this month, he spoke with a plastic surgeon in Medellin named Carlos Ramos to complain the QR code had managed to stop working, which is likely the result of the pigment fading quicker than anticipated or subtle changes to his skin that managed to make it suddenly obsolete.

This somehow isn’t the first time someone has learned why getting a tattoo of a QR code can be a fairly regrettable life choice the hard way, as a soccer fan in Argentina who threw one on his leg to bring up a YouTube video of his favorite team scoring a goal saw it backfire when the clip was taken down due to copyright issues.

A River Plate fan got a QR code tattooed on them that shows the Copa Libertadores final goals against Boca Juniors whenever you scan it with your phone. 😂

I sincerely hope you didn’t really need a reminder that this is a decision you’ll end up wishing you could undo at some point, but I hope this will dissuade you from following in their footsteps if you did.