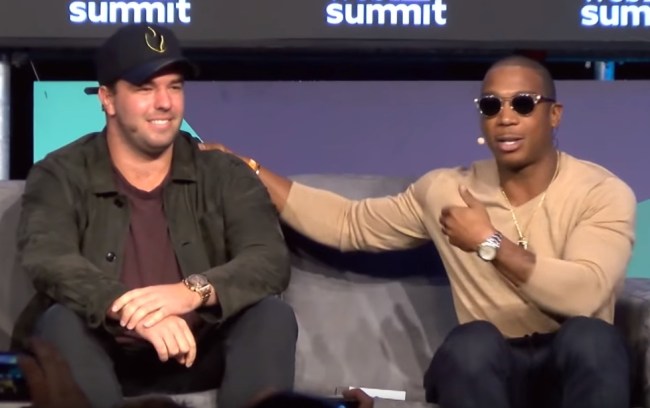 Ja Rule hasn’t enjoyed the negative blowback from all of the negative press about the Fyre Festival. Since the two Fyre Festival documentaries debuted, Ja Rule has been raked over the coals for his involvement with Billy McFarland to attempt to draw music lovers to the doomed concert. Two weeks ago, the rapper even went on a Twitter tirade after fans called him out on social media. Ja Rule has reached his boiling point with being tormented about the 2017 Fyre Festival and he blew up at a recent concert.

On Friday night, Ja Rule performed at a concert in Sayreville, New Jersey. During the concert, there were some rumblings about Ja’s involvement with the Fyre Festival where young people were screwed out of a concert on the Bahamian island of Great Exuma where tickets cost from $5,000 and as much as $250,000. The Fyre Festival promised huge acts, but was canceled even after concertgoers were at the facility. To his credit, Ja Rule addressed the concerns by the crowd and he did so in an amazing way. Instead of allowing the underbelly of negativity about the Fyre Festival take over the live performance, Ja Rule encouraged his fans to curse him out to get rid of their frustrations.

TONIGHT we welcome @Ruleyork to Sayreville – tickets still remain and will be available at the door. #TGIF #JaRule 🔥🎉🔥🎉 pic.twitter.com/lvxqHSUTxv

Ja Rule addressed the crowd by saying they “might be a little mad” over the Fyre Festival documentaries on Netflix and Hulu. The rapper told the crowd: “So get it out your system, ‘cause we ain’t gon do this the rest of the year! Get your middle fingers up!”

Them with his middle finger raised in the air, Ja Rule instructed the audience: “I want y’all to repeat after me, and let me he hear you say, ‘F*ck you, Ja Rule.'” The crowd was happy to call out the Murder Inc. rapper for his entanglement to the Fyre Festival and its founder Billy McFarland. Then Ja Rule ended the chant by yelling, “F*ck you too!”

Things aren’t going so great for Ja Rule, especially when you realize that the Always Be On Time rapper was performing at the Starland Ballroom on Friday, which only has a maximum capacity of 2,000.

Ja Rule and Billy McFarland were hit with a $100 million class-action lawsuit in 2017 for the failed Fyre Festival. To this point, Ja Rule has avoided any jail time over his involvement in the failed festival. Ja Rule has insisted this whole time that he too was a victim of the Fyre Festival. The rapper said, “I too was hustled, scammed, bamboozled, hoodwinked, lead astray!!!” In October, Billy McFarland was sentenced to six years in federal prison for fraud after pleading guilty to two counts of wire fraud and faking documents to secure investors in his company.

Ja Rule has announced that he is involved with a new business venture called “Iconn.” Odd name considering the business sounds like “I con people out of money.”

RELATED: 50 Cent Bought 200 Front Row Seats At Ja Rule Show To Leave Them Empty Is The Most Petty, Most Amazing Troll