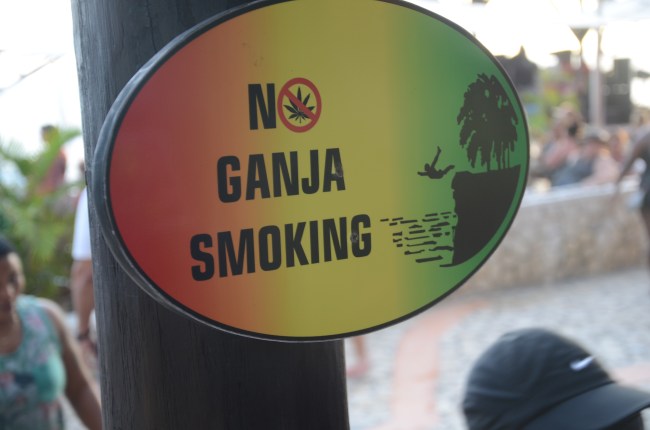 Last year, the lady and I took a deep breath and asked our bosses for three days of PTO. Neither of us had taken a vacation in a year, and we felt it was time. I had been socking away credit card points like I was saving up strikes against my husband for our upcoming divorce hearing, and we settled on Jamaica. Neither of us had been, and a friend of mine mentioned this resort where the waiter brings you a tray of assorted joints arranged in a spiral as you sip rum punch by the infinity pool, watching the sunset. That’s really all it took for me. Well, that and the breakfast being included. We booked our trip for mid-March, and boy, were we excited.

I won’t name the resort because they didn’t respond to my efforts to do some influencer posts in exchange for a discount or an increase to two free breakfasts/day. In fact, I may take some photos of myself on the beach and tag a rival resort out of spite. We’ll see.

As you may recall, March of 2020 was the month where things… went south. We watched nervously as case counts ticked upwards, still thinking we could take our trip even two days before our flight. But then we saw photos of the airports looking like Ellis Island ~1907, and we pulled the rip cord.

The resort I won’t name wouldn’t give us a refund, understandably. Hard to expect a resort that doesn’t recognize the guerilla marketing value of a comedian’s highly-engaged Instagram audience to issue any sort of refund. Instead, they let us postpone our trip to 2021. We chose this upcoming President’s Day weekend, and we’re finally here. So you can imagine how much our anticipation has built. We’ve effectively been looking forward to this trip for fourteen months. It will be our first real vacation in two years. And I’ve been DREAMING about that spiral presentation of joints and that rum punch sunset. In the words of Natasha Bedingfield, so close you can almost taste it.

Jamaica is running low on ganja. The shortage in the famed but illegal market is due to heavy rains followed by an extended drought, an increase in consumption and a drop in the number of traditional marijuana farmers. https://t.co/YaulFscm1i

It's all gone to pot! Jamaica faces 'worst ever' marijuana shortage https://t.co/6a961tOPiF

Heavy rains followed by an extended drought, an increase in local consumption and a drop in the number of marijuana farmers have caused a shortage in the island’s famed but largely illegal market that experts say is the worst they’ve seen.

“Last year was the worst year. … We’ve never had this amount of loss,” Thompson said. “It’s something so laughable that cannabis is short in Jamaica.”

HAHAHAHA YES! YES TRISTON THOMPSON, TRIMMER OF STALKS, GROWER OF BUDS, WRECKER OF KARDASHIANS! I, TOO, FIND IT HILARIOUS THAT JAMAICA’S NUG LANDSCAPE IS DRIER THAN THE DUNES OF THE MOJAVE. JUST TWO DAYS AHEAD OF A VACATION I’VE BEEN PLANNING FOR FOURTEEN MONTHS? PERFECT TIMING! OH MY GOD, WE ARE LAUGHING.

We can’t cancel. Too pot-committed at this point (pun unfortunately, tragically intended). I don’t dare bring my own weed TO Jamaica. You wouldn’t bring a case of Cabernet on your trip to Napa Valley, right?

Hat tip to D.C. Benny for that joke…

Anyway, I’ll keep you guys posted. But if I don’t get my beautiful spiral selection of sunset joints, I might not post a single picture from the entire trip. And as everyone knows, if an influencer doesn’t post a pic of a tropical vacation… did it ever really happen?