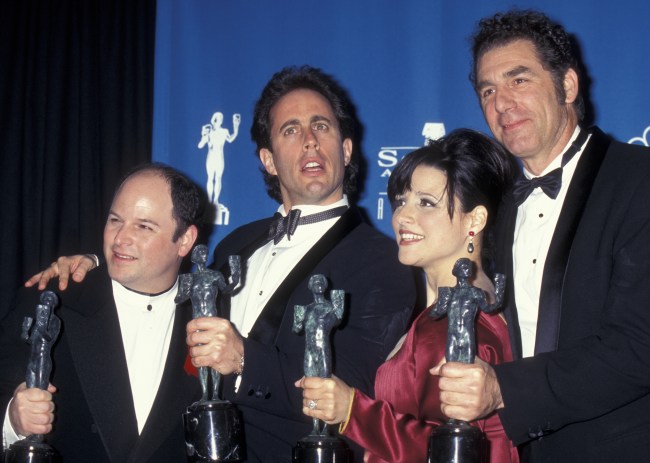 Jerry Seinfeld made a couple of incredible announcements this week that probably caught a lot of people by surprise. That’s because the 66-year-old comedian/actor first told Howard Stern that his latest standup special, Netflix’s 23 Hours to Kill, will probably be the last one he’ll do, claiming he thinks “less is more” when it comes to this kind of stuff — which is why he pulled the plug on the TV show Seinfeld over two decades ago, because he didn’t want to wear it out.

“I already have the material to do another special, but I always like to give a little less than you really want,” Seinfeld told Stern. “If you look back at all the stuff I have ever done — like the TV series, we could have done one, two, three more years. The reason people still love that show is we didn’t wear it out.”

For fans of Jerry Seinfeld’s, the news is a big bummer, as his standup specials are some of the best to stream on Netflix.

But even bigger news? That Seinfeld said in a conference call that his show Comedians In Cars Getting Coffee will probably be pulled, too, ending an 11-year run that saw 84 episodes with some of the biggest names on the planet. Pour one out, guys, because this is a sad day for fans of comedy and killer content.

“We haven’t planned anything with that show. I feel like I did that tour… I know they look very casual and easy but they’re actually a lot of work to make, the editing is very intense and I don’t know, I feel like I may have done that exploration at this point.”

Outside of the major news that Jerry Seinfeld is axing some of his big projects and shows was this: A discussion with Stern about the show that made him the most famous, Seinfeld, which ran from 1989 to 1998 — and still makes absolute bank for the star through a syndication deal with Netflix.

Chatting with Stern about a number of different things, the longtime radio host brought up Andy Kaufman’s name, with Stern saying he didn’t believe Seinfeld was a big fan of his comedy because it was more like performance art. Not only did Jerry shut that notion down, but he went even further by claiming the late Kaufman is the only other actor he thinks could’ve possibly pulled off Kramer in Seinfeld, saying his talent and humor would’ve fit perfectly for the role. Take a look at the conversation below.

“I worshipped Andy Kaufman,” Seinfeld replied, adding that comedy is like music and people can enjoy different genres.

Stern said he believed Kaufman could have been part of the main cast of Seinfeld, not just a guest on an episode or two, which is when the comedian had an epiphany.

Unfortunately, Kaufman died of lung cancer in 1984 at the age of 35, so he never got the chance to seriously be considered for the Kramer role. But it would’ve been real interesting to see if he was still alive when Seinfeld started if he would’ve been given an audition. In the end, Michael Richards earned the role and made it the most unique, quirky, most doofus-y role on TV.