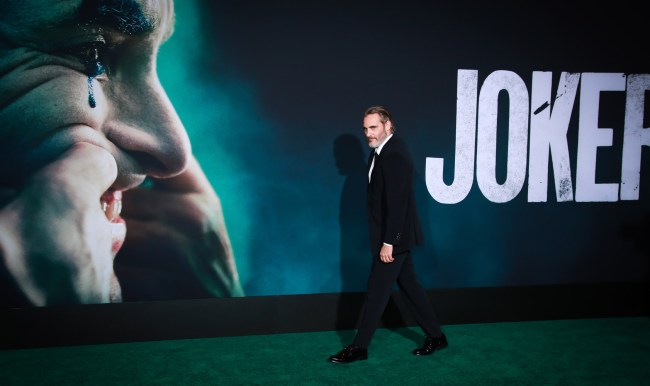 The film has gotten mostly good reviews, but the focus of the film in the leadup to its release has been the growing fears that when Joker does open it will incite the type of violence seen at the showing of The Dark Knight Rises in Aurora, Colorado in 2012.

Loved ones of the Aurora shooting victims have expressed their concern. The U.S. Military has warned troops about the potential for a mass shooter at screenings of Joker. The Department of the Army even released an intelligence bulletin regarding a credible potential mass shooting at an unknown movie theater in Texas. And screenings in theaters across NYC will be getting a special police presence.

All of which prompted Warner Bros. to issue a statement where the movie studio felt the need to point out, “Make no mistake: neither the fictional character Joker, nor the film, is an endorsement of real-world violence of any kind. It is not the intention of the film, the filmmakers or the studio to hold this character up as a hero.”

Now, mere days away from the film’s release, Vanity Fair spoke with Phoenix and Phillips about the controversy surrounding their movie.

“I didn’t imagine that it would be smooth sailing,” said Phoenix. “It’s a difficult film. In some ways, it’s good that people are having a strong reaction to it.”

Phoenix also explained his thought process on how he would try to make a character that is so evil, Joker, also have some sort of humanity.

“I was going through [the script] and I realized, I said, ‘Well, why would we make something, like, where you sympathize or empathize with this villain?’ It’s like, because that’s what we have to do. It’s so easy for us to — we want the simple answers, we want to vilify people. It allows us to feel good if we can identify that as evil. ‘Well, I’m not racist ’cause I don’t have a Confederate flag or go with this protest.’ It allows us to feel that way, but that’s not healthy because we’re not really examining our inherent racism that most white people have, certainly. Or whatever it may be. Whatever issues you may have. It’s too easy for us and I felt like, yeah, we should explore this villain. This malevolent person.

“There’s no real communication,” he continues, “and to me that’s the value of this. I think that we are capable as an audience to see both of those things simultaneously and experience them and value them.”

Phillips, who was recently roasted by many on Twitter for asking why John Wick doesn’t get as much scrutiny as Joker, however, was a lot less diplomatic.

Kind of different context, and only one resembles actual terrorists that have carried out real attacks.

“We’re making a movie about a fictional character in a fictional world, ultimately, and your hope is that people take it for what it is,” said Phillips. “You can’t blame movies for a world that is so f**ked up that anything can trigger it. That’s kind of what the movie is about. It’s not a call to action. If anything it’s a call to self-reflection to society.”

Phillips, who previously directed films like Old School and The Hangover trilogy, also took a shot at politically correctness in today’s society.

“Go try to be funny nowadays with this woke culture,” he says. “There were articles written about why comedies don’t work anymore — I’ll tell you why, because all the f**king funny guys are like, ‘F**k this shit, because I don’t want to offend you.’ It’s hard to argue with 30 million people on Twitter. You just can’t do it, right? So you just go, ‘I’m out.’ I’m out, and you know what? With all my comedies — I think that what comedies in general all have in common — is they’re irreverent. So I go, ‘How do I do something irreverent, but f**k comedy? Oh I know, let’s take the comic book movie universe and turn it on its head with this.’ And so that’s really where that came from.”

That’s… actually kind of woke in itself.

Check out the entire very long piece over at VanityFair.com.