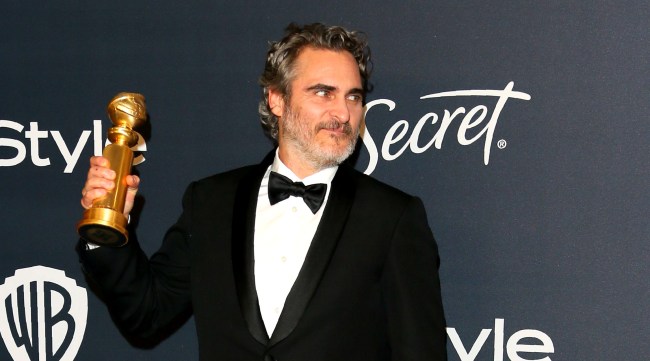 After dropping an F-bomb laden acceptance speech following his win in the Best Performance by an Actor in a Motion Picture, Drama at the 2020 Golden Globes Sunday night for his performance as Arthur Fleck in Joker, Joaquin Phoenix sounded like a man who was getting tired of having to answer questions and talk about the character and the film.

Considering he’s been mentioned as a potential Academy Award winner ever since Joker premiered back in September, it’s understandable that Phoenix is starting to go full “We’re on to Cincinnati” with the media after being asked the same questions over and over again.

Backstage, during the interview session all of the Golden Globe winners have to go through, Phoenix was once again asked about his process and how he developed creating the character of Arthur Fleck.

His face pretty much said it all.

However, despite calling himself a “pain in the ass” during his acceptance speech, Phoenix did end up trying to come up with a different version of the answer he’s already given multiple times before circling back to his inital response.

“Umm, okay, well, it was a long process. I think the way that I worked on this was quite erratic. I didn’t attack it linearly. I think I was most curious of the medications he was taking and the effects of those medications. That led us toward realizing we had to have this wild fluctuation of weight. So that was something I don’t think was expected until I kind of dug into understanding the medication and the effects of what he was taking. So that was the beginning,” said Phoenix.

“I read several books about clinical assassins that share a similar personality type to what I ultimately defined Arthur with. I’m not gonna say what they are because I think those people have got enough attention, so I’d rather not mention them by name, the men I studied and based the character on. There’s probably so many other things that I just can’t remember right now. But I feel like I already answered this question six months ago.”