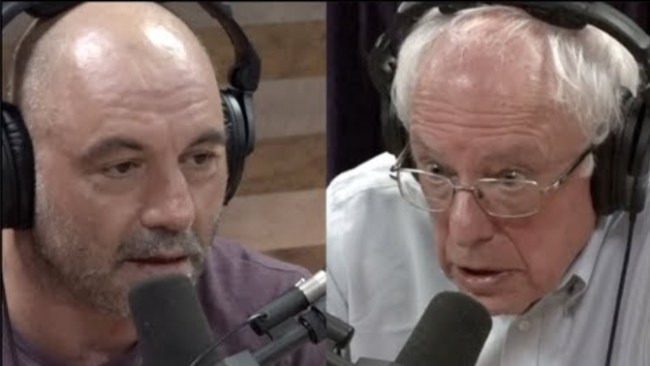 Joe Rogan genuinely attempts to be fair and invite a wide spectrum of guests from all different walks of life to his ultra-successful podcast. However, Rogan’s willingness to at least hear out different voices and points of view have also provided ammunition to certain groups who don’t believe everyone should be able to express their beliefs, especially if those convictions don’t align with their own.

There is a loud minority of people who believe comedian Joe Rogan is “racist, homophobic and transphobic.” Some of which are Bernie Sanders supporters, so when Joe Rogan said that he would “probably vote for Bernie Sanders,” they were not happy.

During a recent Joe Rogan Experience podcast, the comedian and UFC announcer interviewed New York Times columnist Bari Weiss, who turned the tables and asked Joe a question. Weiss asked Rogan, who is a Democrat, who he would vote for in the 2020 Democrat primary.

“I think I’ll probably vote for Bernie,” Rogan responded. “He’s been insanely consistent his entire life. He’s basically been saying the same thing, been for the same thing his whole life. And that in and of itself is a very powerful structure to operate from.”

Not really sure if “consistency” is the best metric to judge a proficient leader. You could argue that Adolf Hitler, Joseph Stalin, and Chairman Mao were all “insanely consistent” during their reigns.

Never-the-less, you understand the nuance of Rogan’s point that Sanders has, for the most part, advocated for the same kind of government policies now as in 1981 when he became mayor of Burlington, Vermont. Whereas a politician such as Elizabeth Warren was a card-carrying Republican up until 1995, but she is now on the left and more progressive side of the Democratic Party.

“Look, you could dig up dirt on every single human being that’s ever existed if you catch them in their worst moment, and you magnify those moments, and you cut out everything else and you only display those moments,” Rogan said while discussing Sanders. “That said, you can’t find very many with Bernie.”

The Sanders campaign took the clip from JRE and shared it to Bernie’s official Twitter account, touting the statement as an endorsement.

“I think I'll probably vote for Bernie… He’s been insanely consistent his entire life. He’s basically been saying the same thing, been for the same thing his whole life. And that in and of itself is a very powerful structure to operate from.” -Joe Rogan pic.twitter.com/fuQP0KwGGI

The Joe Rogan Experience has the highest unaided awareness of all podcasts among monthly podcast users, gets 190 million downloads per month, and has been the second most downloaded podcast on iTunes for over two years. This is fantastic news for the Sanders campaign right? Wrong.

Many of Sanders’ supporters were quick to voice their “outrage” that Joe Rogan was a “toxic” figure that is “racist, homophobic and transphobic.” In the era of cancel culture and oversensitivity, promoting an endorsement from Joe Rogan is apparently atrocious.

Sanders supporters, opponents, and media attacked Bernie on Twitter for being proud to get the Joe Rogan endorsement.

Bernie’s campaign cutting a campaign ad with Joe Rogan fucking sucks. Rogan is an incredibly influential bigot and Democrats should be marginalizing him.

At this point, there's only one conclusion you can draw:

Joe Rogan's racism, hateful transphobia, open misogyny, and disgusting Islamophobia is a *feature* to Bernie Sanders personally. Not a bug.

It's three days in. The Senator has been silent.

If we’re for throwing minorities under the bus to win over the white working class is that the next step?

We’ve said for years the anti-identity politics, class over race argument would lead to this.

It's one thing for Joe Rogan to endorse a candidate. It's another for @BernieSanders’ campaign to produce a video bolstering the endorsement of someone known for promoting transphobia, homophobia, Islamophobia, racism and misogyny.

Joe Biden says there's "no room to compromise" on trans issues, as Bernie Sanders faces backlash for touting an endorsement from @joerogan, who's been a critic of forcing female athletes to compete against biologically male athletes who identify as trans https://t.co/jCJpO5OjMr

Bernie Sanders is facing a backlash from some Democrats after his campaign trumpeted an endorsement from comedian Joe Rogan, a popular podcast and YouTube talk show host with a history of making racist, homophobic and transphobic comments https://t.co/9Uh2b3Da5R

Joe Rogan is a transphobic bigot who shills for quackery and cuddles up to dangerous racists.

Appearing on his show is bad but understandable. Publicising his endorsement is indefensible. https://t.co/A1ZcPWtFGM

Listen to me now, and I can’t believe I have to say it: no Dem needs Joe Rogan’s base to defeat Trump.

We also don’t need to capitulate to homophobia and transphobia (which btw *kills* people *smacks forehead*) for any reason.

This is foul, justifying stuff. No way around it.

There were some people who defended Joe Rogan from the assault on Twitter, many pointing out the hypocrisy of it all.

What exactly is the argument that Joe Rogan's a monster? Because he had a full range of assholes on his show? CNN had Richard Spencer on, MSNBC has war criminals who lied us into the Iraq war on daily, NY Times ran articles about how dapper the altright is, are they canceled too?

The irony of the attacks on Bernie (for touting Joe Rogan’s endorsement), is that Bernie is enormously responsible for this pathological reaction.

Bernie has sown deep resentment wrapped in identity outrage politics, and now he is reaping it. https://t.co/FpvXpgJ22n

The Joe Rogan endorsement kerfuffle reveals an uncomfortable reality in traditional media. Everybody knows podcaster Joe Rogan’s endorsement of Bernie is worth far more the NYT’s endorsement of “WarKlob”.
Let them cry tears of ink.pic.twitter.com/OMGmAPRozZ

It's cracking me up that HillaryStan twitter is so fucking mad about Joe Rogan endorsing Bernie just weeks after she, the almighty feminist queen, went on the fucking Howard Stern show.

The hypocrisy is leaking out of their everywhere.

Actually I thought more about the problem.

If he endorsed Biden, @cnn would Russell Conjugate him as “America’s Everyman Comedian”

This is crazy. I think @joerogan endorsing @BernieSanders is huge for him. Bernie should definitely embrace it. Rogan has a huge, open-minded audience. pic.twitter.com/weVVHPRSTW

Help me understand the rules:

Bernie shouldn’t tout a Rogan endorsement, but Biden and Klobuchar can cite a journalist who agreed with feeding Palestinians to sharks?

Warren and Klobuchar can tout the endorsement of a paper that lied us into war and is promoting race science?

If I understand the argument, @joerogan is responsible for the opinions of his guests, and @BernieSanders is responsible for accepting Rogan’s quasi-endorsement, which makes Sanders a racist transphobe by association and transference, and all of his supporters deplorable. https://t.co/UsJzrYAcXf

I guarantee you @joerogan's massive audience is full of highly educated Americans of all ethnicities, not disaffected white dudes. A Democratic Party that was smarter would be trumpeting his preference for Bernie over Trump.

Some are criticizing @BernieSanders for ACCEPTING @joerogan's endorsement. Rogan & his guests have said terrible things- including about me! But if we turn away everyone who's trying to agree with us we'll have no one left. No one is perfect, including those "canceling" everyone.

I wonder if @joerogan will still support @BernieSanders after he has been introduced to his supporters?

Sanders appeared on The Joe Rogan Experience in August and gave a two-hour interview where they talked about UFOs and drug legalization, of course. Rogan also had 2020 Democratic presidential candidates Andrew Yang and Tulsi Gabbard on the JRE. However, Rogan admitted that at least four other Democratic presidential candidates asked to appear on his massively popular podcast, but he denied them.

Joe Rogan says Biden, Warren, and Mayor Pete tried to get on his podcast and he turned them down. "I like Tulsi and I like Bernie, that's it. Everybody else can eat shit."