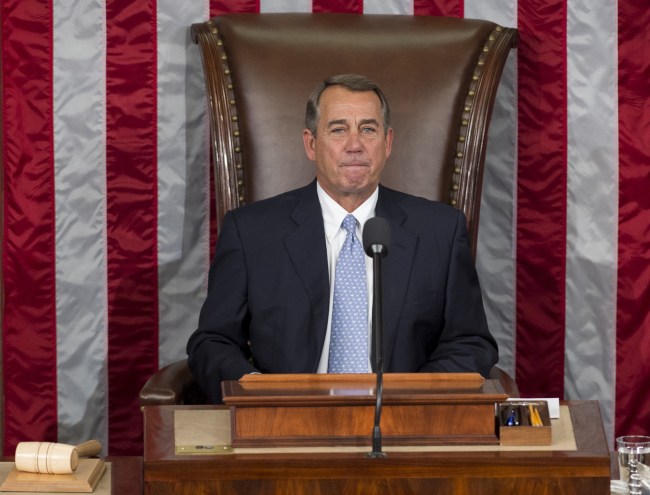 Former speaker of the house John Boehner has been recording his audiobook with, as Kevin Harlan might say, no regard for human life:

John Boehner has been going off script while recording the audio version of his new memoir, using expletives and asides not in the book — such as grumbling, “Oh, and Ted Cruz, go fuck yourself." w @alaynatreene
https://t.co/EQkYcKfzGh

John Boehner has been going off script while recording the audio version of his new memoir, using expletives and asides not in the book — such as the former Republican House speaker saying, “Oh, and Ted Cruz, go f**k yourself.”

Similar to the cover — where he’s pictured in a dark room, drinking red wine with a cigarette burning in an ashtray — Boehner has been taping his audiobook with a glass of wine in hand.

“I can confirm there were some off-script moments during his recording of the audiobook,” Boehner spokesman David Schnittger said. “He pretty much just let it fly, as he did when he was working on the book itself. He’s not really interested in being anything other than himself these days. That is kind of the spirit of the entire project.”

Is anyone living the dream more than John Boehner? Guy is smoking TWO PACKS of cigs a day and recording his audio book through wine-stained teeth. Leave all your fucks at the door, folks, the former speaker is letting it fly.

Sometimes it’s fun to watch politicians become real people once their careers are finished. Many of them have to keep it locked and tight, as they continue to make public appearances, trade on their names, etc. But every once in a while, we get to find out who they are away from handlers, advisors, press conferences, and the ever-present acquiescence to their constituency. Once those puppet strings are cut, we might be gifted a George W. and his paint-by-numbers portraits, Obama kitesurfing on Richard Branson’s private island, or a John Boehner telling Ted Cruz to fuck himself.

Here’s to finding out who these people really are. Welcome back to yourself, John.